The mayor said he is looking forward to promoting Toronto on the world stage and was swamped at the airport and on the airplane for photographs.

Of course, Mayor Ford has never been all that interested in selling the City - he'd spend a little less time talking about himself if that were really the case.  He's there because he likes the attention; it makes him feel validated for the life he leads and the poor example he sets for others.

Make no mistake, though, he will generate attention and social media traffic in spades.  And because of him, so will Toronto.

Do we want Ford to be Toronto's face to the world, via the Oscars and Jimmy Kimmel?  Or do we want to use this opportunity to promote the Toronto we are proud of?

Here's my suggestion; we use this attention to promote the city we know with video, pictures and messages.


I've used the hashtag #TorontoIs in the past - as in

#TorontoIs a film hub in its own right 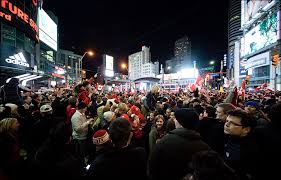 #TorontoIs home to some amazing attractions, history, people and festivals

#TorontoIs a catalyst for innovation, social disruption and talent of all kinds

On Twitter use this, or use your own hashtag - reference #RobFord, #topoli, @jimmykimmel, and @TheAcademy.  Let's get Toronto trending in positive ways and show the world what this city really is cracked up to be.

If we can't count on our Mayor to show the world what #TorontoIs - we can at least use him as an excuse to do so ourselves.