Where Warren is Wrong

What's most interesting about the memo - and I've removed some of the disingenuous/self-serving crap therein, and the name of one of the authors - is this:

Warren Kinsella is one of the best at what he does.  He has arguably been the most influential person in Canadian political operations over the turn of the Century.

While I've never worked with him directly (or even met him), I've had the pleasure of watching him do his thing from the mid-distance.  It's fitting that he's an accomplished artist (drawing and music) because when he performs his political craft, it's much like watching any master produce a little bit of magic.

By his own admission though, what Kinsella does isn't very nice.  By no means a Nick Kouvalis who will make things up to tarnish opponents, Kinsella is really good at narrowing the frame and ensuring only the legitimate negatives of his opponents come to light - and that in spectacular fashion.


His campaign against John Tory is evidence of this.

It is absolutely true that John Tory is a wealthy elitist who has dithered, donated to Rob Ford and hired Nick Kouvalis (another guy I've never met, but whose approach to politics I find cynical and distasteful). 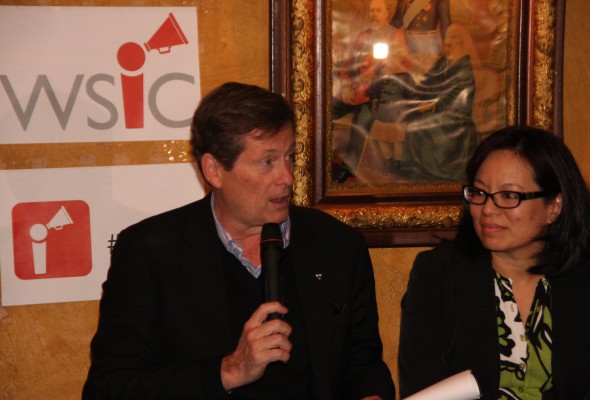 Tory has made some unfortunate remarks suggesting women don't complain enough for money and should take up golf for networking purposes.


They're accurate statements, mind you - indicative of a real problem in gender-biased corporate cultures that reward bluster and smoke-blowing over actual accomplishment.  That Tory is encouraging women to play the game instead of encouraging leaders to rethink the rules is telling of his approach, but not an indictment of his intent.

Because in addition to all these flaws, Tory is a genuine human being with right intent.  He gives a good deal of time and money to charity and really believes that the hyper-partisan nature of our system needs to change.  Yes, he donated to Rob Ford - but he's donated to others, as well.  This demonstrates, in my mind, a commitment to making it easier for people to get involved.  That's not a bad use of his wealth, is it?

These aren't points that fit into Kinsella's narrative though.  From a Socratic, War Room perspective, his job is to tear down - it's the other side who has to sell Tory's positives.

This is no slight against Kinsella himself - this is how the game gets played, and he plays it better than most - but I genuinely believe this approach is detrimental to our democratic system on the whole. As partisans chronically portray their opponents as moustache-twirling caricatures, I'm finding that the successful ones are increasingly caricatures in reality as well as on paper.  Case in point: Rob Ford.


As Kinsella himself has wisely said many times, between a watered-down version of a brand and the real thing, people will go for the real thing time and again.  So, in a campaign between what are branded as caricature candidates and Rob Ford, is there a risk of a cynical public opting to go for the devil they know?

I don't have the answer to this.  I'm no polling guru and I certainly don't have the political experience or acumen of a Warren Kinsella.  What I do know, though, from time spent in community centres, on Twitter and from conversations across the city is that people are tired of politics-as-usual.  They are mad as hell, and are getting close to a point of saying they're not going to take it any more.

Canada is lucky to have a political scrapper like Kinsella on our team - someone unafraid to take on the big bullies on causes ranging from First Nation rights to racism.  We need his skill set on these fronts.

When it comes to political campaigning, though, I'm not sure this narrowly-framed demonization of opponents is the best approach any more.  It works in the short-term, yes - but at what long-term cost?

I'm sure some seasoned political people will tell me I'm not "tough" (i.e. jaded) enough to do "what needs done."  But I don't want to be.

I guess I still believe that moving forward together means leaving no one behind.

Last point - Kinsella blurred out one of the memo's signatories, singling out a woman named Paris.  If she's who I think she is, I know this Paris as a passionate, community-oriented young lady with a good head for issues.  Much like John Tory, I have known her to carve out time and offer advice to people that have nothing to offer her in return.


She might suck at War Room activities - I know I would, too.  But we should collectively be encouraging young, committed women like her to engage in our political system rather than singling them out for negative publicity.

If we make politics an unwelcoming environment for the cause-oriented activists, after all, we'll end up with nobody left but aggressive self-promoters like the Fords.

And that's a narrow frame that serves nobody's interests.

FULL DISCLOSURE - I am not currently backing or working (which, in politics, are two different things) for any mayoralty candidate.  I've seen plenty of criticism go back and forth, but have yet to be inspired by any of the names on the ballot.

Surprisingly, it's from within the Toronto bureaucracy that I currently see the best hope for structural reform.  It's good to see someone is open to change.