Lu Buwei had a vision and was willing to bet his wealth, career, family and life on a long-term investment, because he recognized the value of investing in a person, he became the most powerful person in China.

Not really - it was Qin Shi Huang who became the most powerful person in China.  He unified the nation, built great monuments, shed a great deal of blood and eventually killed himself with mercury poisoning in his vain attempt to live forever.

We remember Qin Shi Huang as much for the misery he caused and the terrible toll his vanity and fear of death took upon the later years of his life.  His is not a happy story, though it is one that endures. 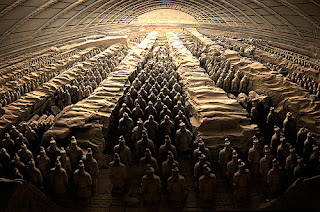 Lu Buwei got mixed up in scandals involving Qin Shi Huang's mother, was stripped of his position by the king he made and eventually committed suicide.  But he is remembered.

Both men rose to the heights of power because of a vision that transcended themselves; both were brought down by their own selfishness.

There's a big difference between investing and adding value:

- one invests with the aim of eventually gaining a significant return.

- one adds value with the hopes of providing that return to others.

We have a whole host of leaders out there right now who see themselves as empire-builders, incrementally investing in closed futures they think will immortalize their names in history.  The narrow tactics and devious tricks they employ to get there inevitably lead to the tainting of their legacies and often as not, their fall from grace.

Which is why I love the concept of Corporate Social Responsibility so much; it provides a win-win for everyone.

There are countless visionary value-adders out there who care not a whit about legacy or what they will get in return; they are truly and openly committed to what they can give, not what they can receive. They are driven by their vision, not their own selfish interests.  But there's not a lot of money in altruism.

If the would-be Emperors are smart, they'll recognize the value in out-sourcing the visionary work and positioning themselves as patrons.  That way, they remove the risks of their ego tainting the impact of their legacy but get to take all the credit - the thought leaders and social innovators won't care, so long as they're given the resources and freedom to do what needs done.

Visionary value-adders - invest in them and you won't be disappointed.