What Do I Think Of Gerard Kennedy? 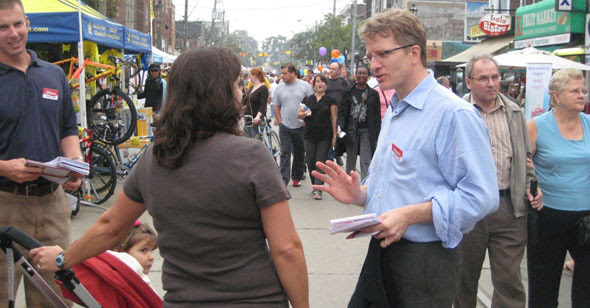 Mr. Kennedy comes from decades of activism, both in and out of politics.
He began by running food banks in Edmonton and Toronto for 13 years.
In politics, loyalty is everything.  It's hard to earn, even harder to maintain.  So, when you have a "lone wolf" and "non-team player" who manages to retain the loyalty of some pretty capable and in-demand people over years, that tells you something.
Kennedy isn't a hard guy to like; he listens, he cares, he's charming in a low-key way.  He also makes time for people, even when they don't necessarily have anything to offer him in return.  It's just the way he is.  Not that long ago, Kennedy took the time to sit down with me, a complete stranger, to listen to my ideas for a social enterprise and offer advice.  Not only did he give some useful direction, he also put me in touch with some partners that have become invaluable.  That's not something I'll forget, and I'm hardly the only person he's helped in this way.
One thing that is true about Kennedy; he is demanding.  He's not a yeller, like some politicians are, nor does he employ passive-aggressive techniques to get his staff to bend to his will.  What Kennedy does is push his people to reach higher.  He's a big thinker - he connects dots in ways that others might not think to do.  That's not a bad thing - we've done the elect the simple message guy thing recently and ended up with Rob Ford.   Friends of mine who've served on Kennedy's team in the past say it's always a challenge working with him, but a rewarding one.  And again, they continue to back him, which speaks to his character.

Also worth noting - Kennedy has been labeled "the man who gave Liberals Dion" because he threw in his support behind the second-last Liberal Leader to be driven into the ground by Stephen Harper's attack machine.  Look at the picture to the right - Kennedy wasn't the only one who thought Dion was worth giving a shot.  What if, for argument's sake, he'd backed Ignatieff?  He didn't work out so well, either.  In fact, if the last two losses have taught Liberals anything, it should be that we have structural problems that need addressed - we have to stop pinning all our hopes and all the blame on our leaders and step up our game at every level.  We have to take collective responsibility for our Party if we want to continue offering positive solutions and making meaningful differences in our society.
Last thing - people are telling us that GK has political losses under his belt and is therefore doomed to fail again.  I flatly reject that notion, because it isn't a Liberal one.  Yes, politics is an aggressive survival-of-the-fittest game and any weakness is sure to be exploited by opponents, but our political system is the foundation around which our whole society is built.  Are we going to tell people who have been fired from their jobs that they are worthless, move on?  Do we tell students who fail tests to give up because they've proven they're not up to the job?  Should we hand our veterans lump-sum cheques and tell them they're on their own?  Stephen Harper won by being the deadliest player on the field; look where it's landed our country.
I am fundamentally opposed to the idea of writing people off - that's not what a responsible society does.  The reason we fall is so we can learn to pull ourselves back up - society and government is the hand that guides.  That's not what's happening now and our society is suffering for it.  We deserve better than that.  We need better than that.  Leaders lead by example; if Liberals truly believe that everyone has something positive to offer, we can't write anyone off as having outlived their usefulness.
We have some amazing candidates who've put their names in the race to lead the Ontario Liberal Party - the province will gain no matter which one wins.  I love the fact that the three front-runners have a solid background in education and social justice, as well as experience working in or interacting with the business sector.  Remember that Tim Hudak has no professional experience out of politics, period.  He has no track-record of success to run on and his bluster has so far done nothing but polarize Ontarians and grind our Legislature to a halt.
Liberals at both levels are faced with a generational challenge - to focus strictly on the win and turn ourselves into a mean political machine like Harper's Conservatives, or aim to be something that reflects the values we hold dear - the values of Canadians.  We will not win by seeking to demolish the opposition; that's the game Hudak and Harper are playing and it's one that's hurting our country.
At both the federal and provincial levels, we win when our communities win, when we put the people, not the Party, first.  We won't find success through dividing and conquering, but by moving forward together.