The Opposite of Responsible Journalism 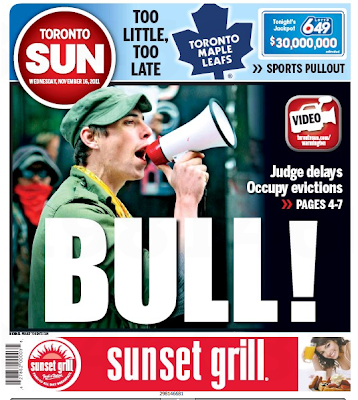 "Responsible journalism," as the Lords called their new defence, posited that if a journalist has taken reasonable steps to verify that a story is true, and has given the subject an opportunity to respond, he or she cannot be found liable for defamation, even if the story contains untruths."

The linked story about the machinations behind the Toronto Star's Rob Ford addiction stories is worth a read.  It demonstrates the tough balancing act reporters like Robyn Doolittle and their editors go through in trying to tell stories, but also maintain those stories' integrity.

Then read this rant by Christina Blizzard.  It's important to note that Blizzard is a columnist, not a reporter, but so far as the public knows there's no difference between the roles.  Which is a damned shame.

Reporters (if they are responsible journalists) will try to find balance in a story, to represent all sides.

It's the story, not their take on it, that matters.

Columnists, however, only offer their opinions, which can be based on as much or as little information as they so choose.

Blizzard's bugaboo for the day is Chrysler's decision not to accept provincial funding because the matter has been politicized.  She mentions the fact that Opposition Leader Tim Hudak decried such funding as "corporate welfare" (a partisan dig that casts as much dirt on Chrysler as it does on the Liberals), but only after rambling about how unfairly Hudak is blamed for such irrelevant matters as baldness and climate change.

This is as childish an approach as Rob Ford's taunting the Toronto Chief of Police to arrest him - the intent is to polarize the conversation into such ridiculous extremes that objective assessment and conclusions are impossible.

Let's deconstruct some of her other points:

- the Green Energy Act has singularly driven Ontario's energy prices through the roof.

Is the assumption, then, that without the Green Energy Act that prices would have fallen?  What's that based on?  What specific line-item costs have directly impacted hydro bills over the past ten years?  What of all the other complex factors that impact the cost of electricity, like aging infrastructure or increasing demand?

Manufacturing firms are leaving Ontario solely because of electricity costs.

Nothing about companies looking to reduce overall cost and maximize profit, period.  Nothing about moving to places like Bangladesh where below-poverty wages are permissible and human rights aren't enforced.  Nothing about plants being closed and more work put on fewer employees.

Why would there be?  It doesn't fit the narrative.

Much like the Fair Elections Act, Blizzard's take on the Chrysler funding issue seems to be a solution (Liberals are evil, ignorant or incompetent, Hudak is maligned) in search of a problem.  This may be emotionally satisfying - it may even sell - but it is not responsible journalism.

It's just the Liberals who are playing political football.

Nothing about Chrysler looking for any excuse to cut corners; certainly nothing about Hudak taking whatever partisan position suits his purposes.

Blizzard's been around long enough to see first-hand that they're all playing political football - it's a game that gets played with our money, but our democracy, but who cares?  Niggling realities like that don't fit the narrative.

Thankfully, at the end of her column she opts to open up her colour box a bit and recognizes that there could me more to the story that a simple narrative.

But that comes after playing a lot of political football.

Bizzard gets singled out for criticism because of the blatant partisan spin of her article but as we all know, there's more than enough criticism to go around.  Even the more contentious reporters (and politicians) are ready and willing to spin a story in a way that stokes fires and sells papers/encourages donations.

Maybe Blizzard's readers know they're getting a one-sided rant when they read her work; maybe they're actively seeking emotional validation for anger at the system.  It'd be nice if the Sun clearly advertized this fact, though.

You can love what Blizzard rights or hate it (and she's likely gunning for just those two reactions), but whatever you're emotional response to her columns, they are not responsible journalism.