Which example should I pull for my quote?  Breach of trust?  Contempt of Parliament?  Empty rhetoric, partisan positioning, misdeeds from staff, lies from leaders, bad behaviour, falsified behaviour, so on and so forth?

This entertainment is not new, you've seen it through and through.

Which is what our politics has become - a melodrama that cycles endlessly, resolving nothing, going nowhere.  Why?  Because the people instigating it are so confident they know where they're going, they actually refuse to look ahead.

Save us, lord, from short-sighted people.  You know, the ones who put the win before actually accomplishing anything.  They position themselves as the only answer to our structural deficits but the truth is they're the problem. 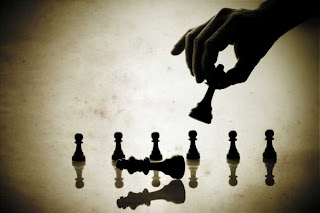 Political operators are convinced of their righteousness and have gotten pretty damned good at confabulating rationale for moral lapses.  It always involves tight political framing of them vs us, meaning we have to do whatever it takes to stop them from taking over.  Only their leader can save us from the barbarian hoards at the gate.

These are the folk behind close doors who look at the people as pieces to be moved on a board.

At this very moment, they are gathering their polling data, field-testing their messages and trying to find the ideal ballot question that frames the next election, every election - we have one municipally, provincially and federally in the offings.

The content of the question doesn't really matter, to them - whatever helps them win does.  That is how partisan politics works, after all.

But these aren't stupid people, nor are the entirely blind to the will of the people, when it surfaces.

That doesn't happen often, especially in these days of message-heavy advertizing and micro-targeted policies and outreach campaigns.  But it does happen, and when the people raise their voice loudly as one, the folk at the top can't but hear our thunder.

Here's what I'm hearing from the people on the street and in our Legislatures reading in the headlines and reports from organizations across the political spectrum and the few genuinely non-partisan ones.

They don't know who's driving any more and certainly don't think anyone knows where we're going.

We see blame, we see deflection, we hear boasts but see little action and almost no process.  We don't trust the people at the top, largely because we can see how much they have cut themselves off from the world they seek to govern.

But the system is such that it really doesn't matter who gets in; corruption, dirty tricks and cynicism have clearly set in at all levels, among all Parties.  You don't cure lead poisoning by changing your cup - you have to get in and replace the pipe.

This is what Open Government and Open Data are doing, internationally.  They're unsexy terms for what is truly a revolutionary movement which will change the nature of government and civic engagement in ways as dramatic as Magna Carta and the English Civil War did for Responsible Government.

Federally, the Harper Conservatives are leading the charge.  Provincially in Ontario, it's Wynne's government.  In plain sight where people aren't looking, bureaucrats at all three levels are working together to make themselves accountable to the people and bridge the gap between citizens and their government.

It's real, it's happening, and it's powerful.

But it's not where any of the Political Parties are focused.  How could they be?  There's nothing them and us about open government - open government is about everyone.  It's bad politics.

But it's good governance.  It's necessary change if we're to break through the barriers that are keeping our society from growing in the way we need to.

Which is why, this time, the people shouldn't leave it up to the partisans to establish the ballot question.

We should be doing that ourselves.

In Open By Default:  A new way forward for Ontario, the provincial government is challenged to establish themselves as a national leader on open governance and open data - to be leaders of the Peaceable Revolution for a Responsible Society.

It's the right thing to do, but it's also a hard path to take, without support - there's too much partisan risk involved.

But not if we make that the ballot question.

If Ontarians make it clear that we're done with spin and messaging and want to see our leaders walk the walk, we could frame the ballot question like this:


Which Party is going to demonstrate their commitment to Open Government and Open Data between now and the election by becoming completely Open Themselves?

They could position all they want, frame themselves as the solution to the Opponent problem all they want, spend their money on as many attack ads all they want.  It would be resources addressed to the wrong problem, as partisan politics so often is.

We would look for the Party most able to open its doors for total transparency and direct accountability.  Every staff hire, fire, training paid or not paid for, advertising dollar, consultant dollar, fundraiser held and who attended, community consultation and which groups were invited would be open for the people to see.

If we believe a Party is open, then we'll believe they're open to advice, consultation, shared solutions - democracy.

If, and only if, we see that they are walking the walk, they would get our support. Should every Party see clearly, unequivocally that the people have an unshakable devotion to open government, they would all have to move in that direction.

Win or lose, the people would reward the behaviour they want, forcing each Party to continue down this path in perpetuity until, as with any evolution, openness becomes innate.

It's not about left or right, them or us, who's at fault - it's about everyone moving forward.

Whichever Party willing to trust the people and lead by example, we would trust in return.

This may sound like a pipe dream, but it isn't.  It's a reality that's emerging right now.  And those Parties unable to adapt to this spin of the wheel are going to find themselves falling behind.

Which is how it should be, no?