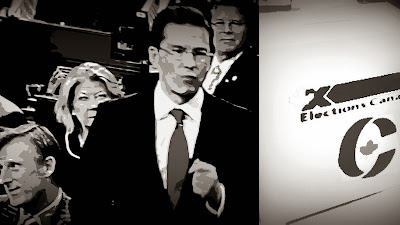 I see tons wrong with this statement, though would agree that it does capture the spirit of our Parliamentary system which, in theory, is about motivated interest groups getting representatives into Parliament so as to hold the Queen's Government to account.

Only those motivated interest groups represented in Parliament are also forming government, meaning the special interest groups are supposed to hold themselves to account - but that's a topic for another day.

Right now, I want to focus on Poilievre's use of the word "inspire."  The Conservatives use a lot of words in ways other than they were intended to be used, ranging from positive terminology like "transparency" which to them, means anything but, or offensive terms like "tar baby" that are probably employed out of ignorance rather than contempt.

But inspire?  To fill (someone) with the urge or ability to do or feel something, especially to do something creative?

Let's take a look at the Conservative Dream and see how inspirational it truly is.

I have a dream - a dream of a Conservative Canada that is the envy of the nation for its strong governing hand at the till.

This is a nation that is build on the bounty of our natural resources - oil from Alberta, lumber from BC, Ontario and Quebec, minerals from all over the place and of course, our cheap, trades-skill oriented labour.

In my vision of Canada, we are a bastion of free trade - we sell off our resources for other people to make, then buy back the finished products.  We need never worry about the innovative process or whatnot, because we have an infinite supply of resources that other countries want.  See?  Free trade works in our favour, because we will always have what they want.

This Canada consists of a population of people that, wherever they come from, embrace one ideology (objectivism) and practice some form of monotheism.  The majority of the Canadians in this Canada are happy to punch their clock, do their job, then go home to their 2.5 kids (probably watched at home by one of the parents, preferably the mother) and watch TV on their flat-screen TV.  It's a perfect, packaged life with the odd vacation to Florida - simple, happy, uncomplicated, unchallenging.

There will be some Canadians, though, who strive for a bit more.  They want to be bosses, make big bucks and be the engines that drive our economy.  We want and should encourage these tough-minded entrepreneurs, because they're good for us (well, there's no us - that's sociology - but they're good for the economy).  These are the folk unafraid to bust some heads, have the fortitude to keep costs low and aren't frightened off by risks such as environmental degradation nonsense as they pull more and more resources from the ground.

My Canada is kept safe from troubles lapping at our shores by massive firewalls that, don't fret, will have no impact on free trade (just trust me on this) and kept safe internally by tough justice measures.

Lots of jails in my Canada, and lots of courts, which is great - those are jobs, right?  But we don't want to have a bloated public sector, so maybe we should privatize these.  Private business does a much better job of fair management of things like justice than government does, anyway.

This is a Canada that is all about individual competitiveness, which comes from throwing kids into the deep end so they learn how to swim.  Social services are for the disabled and retarded (because really, if someone doesn't grow in the same way as the majority, they most have fallen behind, right?) who have no hope of contributing to society anyway.

And so we're clear, we know the difference between the retarded people and the evil criminals, so the right people will go to health institutions and the wrong ones will go to jail.  A key distinction.

But back to the tough, competitive individuals in the non-society that is my Conservative Canada.  They are a giving people, these Canadians - to Political Parties.  In fact, Politics is the number one charity people donate to!  They wouldn't want to give their money to poorly-managed Not-For-Profits who cater to people's weaknesses, and they certainly won't pay much in taxes - people hate taxes for the same reason they hate government, because it's too collective-y.

No, Political Parties inspire, or at the very least make others afraid and provide all the emotional validation people could want, like modern bread and circuses.  People love black-hat/white-hat entertainment and the idea of steady hands, strong governance, so they will spend their money investing in that strong hand at the till so that they can sit back and enjoy the ride without much effort.

In this Canada, people don't waste their time with things like art, which serves no practical purpose, or philosophy, which is all crap anyway.  They certainly don't commit sociology - heck, when everyone feels the same way about everything, there's no need to.  It's a better system.

This, then, is the Conservative Dream of Canada as I have seen it described by the Harper Conservatives.

You tell me - does that inspire you when you donated?  Is it enough to base a nation on?