Netflix a Conduit for an Open Society? "It's almost a human rights violation what they're charging for internet access in Canada," Netflix Chief Content Officer Ted Sarandos told a conference in Los Angeles last week, as quoted by GigaOM.

"The problem in Canada is ... they have almost third-world access to the internet," he added in an interview a day later.

What does Netflix have to do with Open Data, you might ask?  How can Netflix be a catalyst for the culture change needed to kick Canadians out of their complacency and become more directly engaged in shaping government?

Well, it's funny you should ask.  Because Ted Sarandos has essentially identified one of the core problems impeding the full bloom of Open Government in Canada - access.

Governments can put their data online, but can people access it?  Would people in downtown Toronto have better access to information than people in, say, Moosejaw or St. John's?

How many citizens actually know there's a push from some quarters for public data to be made public - and why that's a good thing?

Not enough.  Nobody's reaching out to them in a way that informs, empowers and engages - at least, not yet. 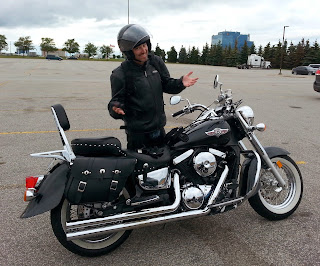 This is the sort of bold, disruptive and visionary approach Canadians tend to be bad at, but the challenge virtuous schemers of the Open Government movement have taken upon themselves.

Among them is a fella named Richard Pietro, an engaged citizen who, despite not working in government, in Big Data or in Public Relations led the charge that organized Open Data Day Toronto, bringing 360-plus people from the highest ranks of the Ontario/Toronto government and civil service to a group of grade 10 civics students into one room to make change happen.

And it is happening.

Now, Richard is taking his passion, connections and understanding of how Open Government/Open Data will change everything on the road.  This summer, he'll be touring across Canada, discovering his country as he shares the message with elected officials, bureaucrats, engaged citizens and grassroots catalysts.

The Open Canada/Open Road tour is going to be a bit like Fight Club, except with a focus on bringing people together.

An ambitious part of Richard's vision is to empower people across the country to capture this journey of discovery and collaboration on video, post these videos online in one portal and enable anyone with the time and desire to craft documentaries, stories, parodies, whatever they want with that footage.

It'd be open data in practice.

The problem is that this isn't something that has ever been done before, and here in Canada we're not so great at bold risks.

But clearly, Netflix is.  They get video, they have resources and they have a clear why in place - disrupt the complacent culture in Canada that's impeding the growth we need to succeed.

Richard's tour is happening - you can read about it here and see his pitch to Yamaha for a bike to explore the country with here.

Open Government is coming - it has to.  Open Data is necessary for Canada to grow as it needs to into the Knowledge Economy, but to get there we need better internet access for all Canadians.

Which, I would think, would be something Netflix could get behind.

I'm all about the win-win, and I see one here.  If Netflix can help get an Open Sourced Open Road video platform online and make it accessible to as many Canadians as possible, they can catalyze a movement that will, unfortunately, leave some people behind - but give everyone reason to push for the changes we need to foster a truly open society.

And if Netflix had a contest for best Open Road documentary and aired it themselves?  I bet Canadians would love them for it.