Why Rob Ford Should Compare Himself To Winston Churchill 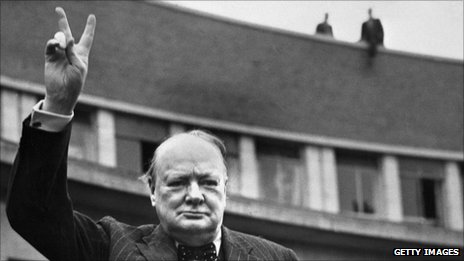 These observations suggest that when he wasn't depressed, Churchill probably had hypomanic (mild manic) symptoms: he was high in energy, highly sociable and extraverted, rapid in his thoughts and actions, and somewhat impulsive.

It's well-known that Toronto Mayor Rob Ford can be erratic in his behaviour, tenacious in his beliefs, has moments where he's excessively social and others where he's a crying wreck.  There's more than enough video evidence to go around.

Equally, Ford can be hypomanic and impulsive (although it's quite possible such episodes are artificial).  Beyond magnets and phone calls, however, I'm not sure our Mayor can match Churchill in terms of productivity, but that's another topic.

Churchill was fiery, stubborn and proud.

Such is equally true of Rob Ford.

Winston Churchill was dogged by mental illness his whole life.

More than a couple people have questions Mayor Ford's state of mental health.

Whereas Churchill was very open about his depression, calling it his "black dog," Rob Ford has admitted to smoking crack cocaine but vehemently denied any mental illness, including addiction.  Ford has also repeatedly lied about his own behaviour and, when caught out in his lies, demonstrated a helplessness to do anything other than say sorry.

Churchill faced his demons head on, accepted them as part of who he was and channeled all his abilities into heroic deeds.

Rob Ford refuses to face his demons which return time and again to plague him, his term as Mayor and the City he clearly loves.

I doubt that Ford has an inner Churchill waiting to be unleashed, but I am certain that accepting the fact that he's got some issues that need addressed would do him (and his performance) a world of good.

The key point is that mental illness is nothing to be ashamed of, any more than stigmatism, asthma or even polio.  Churchill may have been sick, but he certainly wasn't weak.

We have to get over the notion that mental illness is indicative of weakness.  That's like feeling that gay is a contagion or foreign populations have a zombie-like sameness.  After all, when we give in to stigmas, we're simply demonstrating our susceptibility to limbic thought.

As someone in a position of leadership (and with aspirations to lead again), Rob Ford has a perfect opportunity to show how brave and citizen-minded he really is.

Churchill did - and because of this, he's remembered for what he accomplished, not the symptomatic expressions of his illness.

Is Rob Ford tough enough to face his demons head on, as Churchill did?  One way or another, the answer to that question will define his legacy.
Posted by Craig C-E at 20:43