A Lesson For Politics: Leaders Put The Team Before The Parade 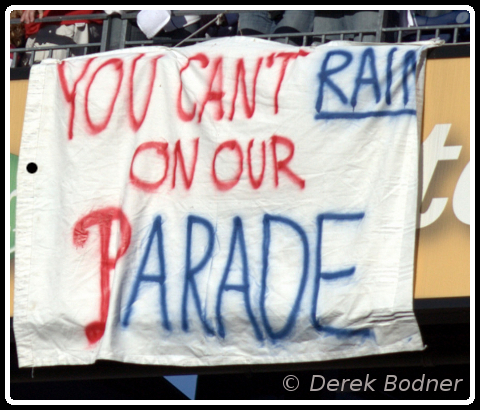 When party loyalty trumps loyalty to residents - as it does now - it's a recipe for disaster.  And I'm just not going to be a part of that."

Many years ago, my hometown of Cornwall, Ontario hosted an annual international dance festival called Worldfest.  Every summer, international dance groups would come to town for a week and perform on stage at paid events, in public venues for free and the like.  Worldfest was part of the Canadian summer dance festival circuit; groups from all over would apply for festivals, raise funds for the trip and go out on an adventure.

I got involved with this festival as a volunteer at a young age; it was exposure to the global village through Worldfest that first got me interested in language, culture and travel.  My social nature and ability to both organize and motivate made me a natural guide for visiting groups; I would be assigned a group and made responsible for ensuring they kept their scheduled appointments and serve as their liaison to the festival, performance hosts and the community at large.

It was very important for me to ensure the group I was guiding had a valuable experience themselves.   They had invested a great deal of their own time, money and energy into their craft and the trip; I felt it important that treated as dignitaries, not functionaries.

Having said that, many of the festival's directors, like directors of anything, saw the festival primarily as a feather in the cap of their community standing.  They wanted the best outwards-facing events possible and felt that everything else was secondary.  To them, both performers and volunteers at large were functionaries, charged only with doing as they were instructed.

Nowhere was this the case more than the tent-pole event of Worldfest, the Parade Of Nations.  All of Cornwall would come out for this parade; it was one of the highlights of the year.  The main streets would shut down, local dignitaries would put on their best clothes and ride in fancy cars and the city became a joyous palate of song, colour and culture.

Organizing any parade is a tricky business and the people behind the Parade of Nations were far from professional organizers.  They felt enormous pressure to get everything just right, as they felt their reputations were on the line.  This pressure got passed down the chain where it was felt most acutely by the committed young volunteers who just wanted everything to be great for everyone.

If there's one thing anyone who organizes a parade can tell you it's that you can't control the weather.   The best-laid plans can and are completely derailed by rain; it's very difficult to shift so many moving parts, even if you have a couple of day's warning.

Worldfest's Parade of Nations had a solid record of not being rained out.  Even on days where it rained in the morning, the sky always seemed to clear long enough for the ground to dry before the performers and their beautiful, ornate costumes took to the streets.

Except for this one year, when I was guide for a group from Argentina.  I think I was 13 or 14 at the time. 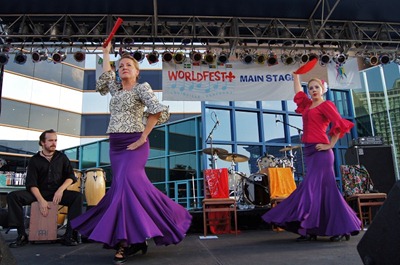 The dance troupe were an amazing collection of people; full of life and laughter, charming and laid back in that irrepressible Latin way.  This posed no problem for me in terms of ensuring they kept to schedule, as I quickly learned to tell them departure time was a half-hour earlier than it actually was.

This allowed plenty of time for them to get their gear packed and loaded on the bus, ensure stragglers were found and still be able to chat and be merry along the way.

My efforts were enormously helped by the group's young director, a very serious, focused caballero named Carlos.  Carlos was part drill sergeant, but he was also 110% committed to his team.  Performers who were late or disrespectful were quickly brought in line; those who were ill or homesick or simply couldn't find a missing broach were comforted and supported.  The show must go on, was Carlos' mentality, but the performers are the show.

The week carried on and, due to the political-campaign like nature of the festival, I got very close with my group.  I actually kept in touch with some of the dancers for many years after.  Parade Day came with grey skies; it looked like Worldfest's perfect record of rain-free Parades of Nations was about to be broken.

As the groups began to form up in the assembly area, there was some concern from some performers and directors (including Carlos) about the chance of being caught in a storm.  They were worried about potential damage to their costumes and, not surprisingly, didn't like the idea of being out performing in the rain.

Carlos told me that he was seriously considering holding his group back; the odd drop was already falling and the skies just kept getting darker.  His concerns were valid, so I brought them to the parade director.  He was not happy with me at all.

"Listen, Craig," he said; "the whole city has come out for this parade.  They expect a good show and dammit, we're giving it to them.  You go back and tell Carlos that we have paid for them to dance (performers did get a small stipend for participating) and that's exactly what they are going to do."

"But Carlos has a point," I iterated.  "They do have expensive costumes and if it pours, they could be wrecked."

"That's their problem," the director replied sternly.  "I don't care what you tell them, but you get them in line."

Dutifully, I went back to the group and to Carlos.  I told them the director wanted them in the parade no matter what.  Besides, I said, it wouldn't rain; the skies would clear up.  They always did.  At this point the drops had intensified into an almost steady drizzle.

Carlos said no, that he couldn't in good conscience put his team in a position where they could get drenched, potentially damaging their costumes and getting sick at the same time.  If it rained hard, Carlos said, there would be no audience anyway; they would have the sense to get out of the rain even if my director didn't.

I pushed back, as I'd been instructed to do.  I stuck to my "the sun will come out" line; I applied guilt and pressure tactics, pointing out how the other groups were not backing down and that it would be a shame if Argentina was the only country not to follow through.  I even mentioned the stipend, though I hated to do so.

Carlos' response was as stern as it was insightful.

"We have performed each event you have put before us, which have been many, and we have not complained.  Yet now you bring up money?  If that's what this is about you can have it back.  My duty is not to your parade or your directors.  It is to my team.  We have worked hard at this festival, at the last one, and will continue to work hard at the next - which we can't do if our costumes are ruined or if my performers are sick.  When this tour is done we will go home and train for the next one.  How can I ask for such dedication from them if I don't respect their concerns now?"

I didn't know what to say.  I agreed with absolutely everything he said and felt a sudden rush of shame for having failed to consider the interests of his team.  I'd let them down and I knew it.

My face must have looked absolutely crestfallen, because Carlos tilted his head and considered me thoughtfully.  Then he smiled, put his hand on my shoulder and called his group to attention.

"Friends," he said.  "Our guide and comrade has been put in a tough position.  His directors have told him he must make us perform whether it rains or not.  I have told him that what we do is not for him to say.  It is for us to say.  So I ask you - for Craig, would you be willing to perform, even in the rain?"

The group said yes.  One of the girls in the group who I'd befriended smiled at me and said "of course we will, you just needed to ask us, not tell us!"

Carlos turned back to me with a grin.  "You've been with us the whole week, hermano - that makes you part of my team.  And I take care of my people."

Feeling grateful, inspired and more determined than ever, I went back to my director and told him that the group would perform, but that I was holding him responsible for ensuring they had means to block the rain when it came; it could be dollar-store ponchos or umbrellas, I didn't care, but that was what we owed them.

And that's what happened; someone went to the nearest Dollar Store and picked up all the ponchos they had, not just for my group but for every group.  Going forward it became standard practice to have a stock of ponchos available, just in case.  Never again was a group or a guide put in a position of having to choose between performance and well being - because we were prepared.

I have thought about this story many, many times over my involvement in politics.  I have seen hard workers discarded without thought when majorities turned to minorities; I've heard valuable constructive criticism shot down because it challenged the Party narrative; I've even seen volunteers sink into depression and worse because leaders and organizers saw them as functionaries, not team members.

And I have seen many a leader fall as a result.

It's the most basic leadership lesson, yet one that continually escapes far too many people in positions of power; team doesn't serve leaders, leader empower teams.  When  your troops, performers, volunteers or even paid staff see that you value them and recognize them as the conduit through which a mission or mandate will be achieved, they will follow you into whatever storm lays in your path.

That's called trust.  There's no loyalty without it.

It's a lesson a whole host of political leaders and organizers today should learn.

And by the way - the rain did hold off on that Parade Day, so many years ago.  Carlos would later ask me if I'd been feeding him a line, or if I really knew the skies would clear.  How could I reply but to smile?