Joseph Dreams of the Canadian Economy

In the face of modest growth, the path to better profits comes mainly from figuring out how to make the same number of widgets with fewer workers.

Canada also happens to be blessed with a huge store of natural resources that most countries can only yearn for.

For all that, though, the resource sector has also shown signs of weakness, as demonstrated by the recent layoffs at Potash Corp. and Encana.

I don't buy Mclean's.  In fact, I don't buy any newspaper.  I rarely even pick up the freebies at the subway.

There's no need for me to - I can and do get all the news I want online.  I pick headlines from Twitter, browse my favourite news aggregates, check out bloggers and listen to the televized scuttlebutt that counts as broadcast news.  To an increasing degree, that's where legitimate news-presenters are pulling their stories from anyway. What I see through my samplings is a world of people who are increasingly retreating into comfortable perspectives, blinding themselves willingly to the realities that disagree with them.  It's happening on the political right and left; it's happening at the top of the economic food chain, where the "upper class" carry on as though nothing has changed, because for them it hasn't.

But everyone else feels this growing sense of foreboding, like the present is unsustainable, that there's a fall coming.  Political fundraising is up, and much of the money raised will be translated into ad blasts both for and against.  Putting their hope in slogans or hedging their bets against what they feel are barbarians at the gate, donors are placing more than their money in the hands of partisans; partisan donations have become a form of indulgences.

Clearly, not many, because the whole print industry is tanking.

That, and natural resources.  Canada has always relied on natural resources - we've got lots of 'em, they are the base requirement for making pretty much everything else.  It's a key reason why Canada has never been an innovative country - we've never felt the need to be.

So, the economic battle rages between productivity and profitability of our existing industries - the resource sector, which is proving not to be the Gold Calf it makes itself out to be, and traditional manufacturing, which as the quote at the top suggests, will be strengthened by making sure more gets built with less while also seeking to open new markets.


Cull employees and reduce regulation, some on the right say; trim the fat and squeeze more out of your existing stock of workers.  Get rid of unions, for all they do is reduce the competitiveness of a workforce.  Wrong, the other side will say - workers are being pushed to the max, are seeing benefits shrink and are increasingly unable to plan for the future or buy new big things, which is in no small party why traditional manufacturing is taking a hit.  Both sides are increasingly ready to revolt against each other, and not just at the polls.


Both left and right dig in their heels and build up their walls, countering any cherry-picked data that disagrees with their positions with attacks.  At the very top, we have the same politicians who decried investments in green energy putting all their eggs in the Oil Sands cart. This is the Winter of Canadian discontent.  Where we are is where we are, we have to find out how to make it last.  After all, there's nowhere else to go, is there?


Canada cannot win on the widget-making score.  The quality-of-life that has become expected from the middle and the top simply doesn't allow this to happen.  The middle-class who were used to movies on the weekends and annual vacations to Florida aren't going to be content to live the life of a factory worker, with vacations time off work rather than time away.

No, they're going to feel slighted, like someone has taken something away from them and look for someone else to blame.  It's what they're doing right now, and the sort of stand-against positioning we're seeing supported to an increasing degree at the political level.  It's social kindling that leads nations down dark paths.

Meanwhile, Canada doesn't need to be fighting the widget-making battle.  There are new opportunities emerging in advanced manufacturing, new tech, innovative products and services and all kinds of new fields.  There's no reason we couldn't be leaders in emerging fields, other than our own entrenched, laissez-faire mentality.

But to get ahead in the Knowledge Economy, we need to think differently: 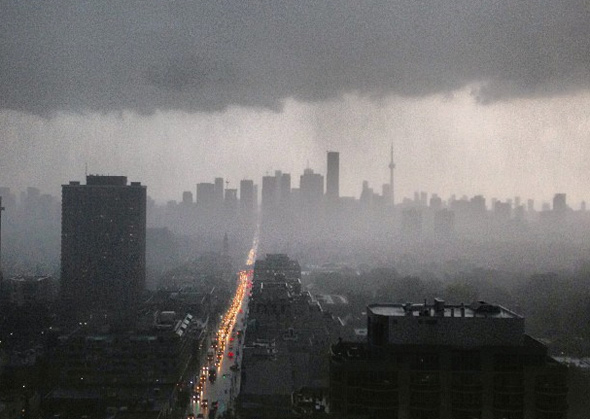 Despite warning and entreaties, Canada has done a poor job preparing for this winter.  But Spring is yet to come, as are the torrential rains that come with it.  It's not too late to plant the seeds for a better adapted, more innovative economic matrix and start consciously planning to adapt to the needs of the future.

This is no small feat, though, as it means disrupting many of the comforts Canadians have clung to; the sanctity of the individual and a laissez-faire comfort with the status quo that always puts the burden of action and change on others.

It takes guts to go out into the unknown, to pioneer new avenues.  It's a risky business, stepping out your door, even when you know your roof's coming down.  But adventures are always fraught with peril, largely due to the fact that they involve learning to trust the people you share the journey with.

When we quit thinking primarily about ourselves and our own self-preservation, we undergo a truly heroic transformation of consciousness.

A transformation of consciousness is what is waiting for us, if we choose to pursue it.

If we choose not to, however, the risk of the outdated model we've relied on thus far being entirely washed way only worsens.