It's the Culture, Stupid: Corporate Welfare and Horatio Alger 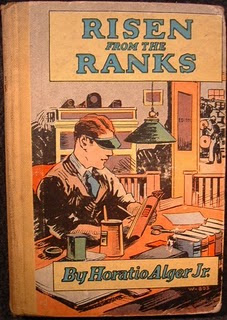 Alger wrote a total of 18 novels for youth between 1867 and 1873, the most famous being Ragged Dick.  His storylines followed a similar path: a young boy living in poverty overcomes the odds by living an honest life and working hard.  The villains in his books were often wealthy bankers, lawyers and country squires.

The Horatio Alger myth is closely associated with The American Dream - the belief that with honesty, hope and hard work, anyone can rise from the ashes of poverty to the heights of power.

This notion of the ability to succeed despite an inequitable playing field has been co-opted by Objectivists and Libertarians on the Political Right; in their take, the villains have been replaced by governments.  If it weren't for oppressive, stifling regulation and burdensome taxation, they say, businesses would flourish and enterprising individuals would get ahead.

The problem, they will tell us, is that regulation and taxation stifles the ambitions of corporations large and small; the welfare state coddles individuals, oppressing their natural ability to rise up and succeed.  Get rid of the system, let the free market do its thing, and everyone will magically start behaving in a successfully selfish, go-get-'em way.

Individuals should look to the wealthy bankers, lawyers and country squires for inspiration - after all, if they could succeed, anyone can.  It's just a matter of the have-nots getting over themselves and doing what it takes to get ahead.

After all; if Horatio Alger could do it, anyone can.

Last night I had the privilege to attend the relaunch of Make Web Not War.  MWNW is a passionate community of tech enthusiasts primarily, but increasingly boasting representation from the world of communication, policy and community activism.  The goal of MWNW is to catalyze an Open Society, where people freely share information and work collaboratively for a better world through - you knew it was coming - honesty, hope and hard work and an actual sense of community (raise all ships, go far together).

The sponsor for MWNW is Microsoft, a corporate giant.  They have put a great deal of money into their open community initiative and are proactively engaging in other open society projects such as Open Data Day Toronto.

That bears repeating - they make money by doing what they do well and are investing back into the community, despite whatever taxation and regulation impediments may be in their way.

Microsoft isn't alone in this; organizations like Bell Canada have invested heavily in Let's Talk, a suicide/crisis hotline.  Corus Canada invests in education initiatives.  There are countless examples of successful businesses that aren't sitting on their capital, but investing it back into their communities. They aren't waiting for regulatory or taxation changes - they're succeeding and contributing on the strength of their own drive, offerings and vision.


Then, take a look at a company like RIM.  RIM had a huge burst of success that actually declined as Canada/Ontario's regulatory and taxation burdens declined.  What government did had nothing to do with RIM's failure; they simply stopped being as innovative and trend-setting as they had been.  The became complacent and sought to beat existing trends, not set new courses.

And what of the car manufacturing industry?  Is it government's fault they aren't succeeding?  The Political Right has derided the provision of "corporate welfare" propping up failing industries in much the same way as they deride welfare for individuals.  Meanwhile, the Political Left gets mad seeing government dollars end up lining the pocket of increasingly wealthy CEOs. Why on earth would CEOs be pocketing money that could be better used to incent productivity and innovation from their teams?  Is that, too, the fault of government?  If so, then how do you explain Make Web Not War or Bell Let's Talk or the private support for Open Data Day Toronto?


I've said it before and will keep repeating the same message (that's what they teach you in politics): what's good for the goose is good for the gander.

If the Political Right expects individuals to pull up their boot straps and find success, no matter what circumstances of poverty they find themselves in, then the same must hold true for corporations.  They don't need excessive tax breaks or the strip-mining of regulation; if so, then their successful, pro-social peers couldn't have succeeded either.

Of course, that's a simplistic assessment that misses the big picture.  We have crafted a culture of self-interest in Canada, one that largely fits the objectivist narrative of one Stephen Harper.  When you put your own wealth first, then that becomes your only goal.  You're not interested in helping others, or investing in others, but rather in reducing costs so that you can retain more income.  Which is what Right To Work is all about, too.

So here's a new spin on an old theme - it's the culture, stupid.

We are encouraging people to be hewers of wood and haulers of water, profiting much from as little innovation and investment as possible.  It's true from the top to the bottom; we want sellers, not pioneers, and counter-intuitively are motivating the kind of behaviour that's holding us back.

Not that it should matter what policies are set from the top, nor the hurdles that lie on the path to social consciousness.

If Microsoft can do it, Canadian CEOs, so can you, without waiting for some magical government vanishing act to make your lives easier.

So quit making excuses and get it done.