Sweet Home Alberta, Where the Ground's A Slick Hue

Well, I heard Mister Young sing about her
Well, I heard old Neil put her down
Well I hope Neil Young will remember
The CPC don't need him around anyhow

Neil Young has made some headlines of late.  He's declared the Alberta Oil Sands a man-made disaster, going so far as to compare Fort McMurray to a Hiroshima-like wasteland.

This was a bit over-the-top; Hiroshima was a crowded city that was flattened with the intent of massacring everyone in a demonstration of force to cow the Japanese military machine.

Comparisons between the Oil Sands and Mordor are far more appropriate - it is a landscape rendered inhospitable by activity designed to grow profit and power.  Nobody (no human being, at any rate) was living there, so no direct effort to harm people has been at play.

The Oil Companies are doing what they are supposed to do - finding easy ways to profit and maximize their profit through the cheapest means of production possible.  Alberta is benefiting from the oil-generated wealth, so from an economic point of view, they're happy.

The Stephen Harper Government of Canada is determined to slay the deficit, reduce public services and get everyone focused where they should be - on profit and consumerism - so they're all for expansion in the Alberta Oil Sands.  Drill more, sell more, diversify markets, get all Canada working in the natural resource sector - what can go wrong in this picture?

Well, a lot, actually.  Lots has been written about the impact of Oil Sands development on the flora and fauna of the region (what was there before, not so much now), but it's the leakage and potential impact on people that's of gravest concern.  Since 2009, for instance, there have been correlations made between higher-than-usual cancer rates in First Nations communities around the Oil Sands development region.  It's taken years of intense lobbying to even get to a point where studies are being done on this correlation to see if and how a connection might be made.

This probably annoys the Feds to know end; they're trying to get out of the healthcare business and focus on the economy and all this health-and-oil stuff is a big inconvenience.  Like a dentist-weary patient with a growing cavity, it's one of those things best ignored in the hopes that the problem will just stay as it is and not get in the way of extracting all that black sugar.

So, through a spokesperson, Stephen Harper weighed in with his response to Mister Young:

"The resource sector creates economic opportunities and employs tens of thousands of Canadians in high-wage jobs, contributing to a standard of living that is envied around the world and helping fund programs and services Canadians rely on."

It's so true.  If Albertans weren't making good money off the Oil Sands, who could the provincial government tax to pay for cancer treatments for First Nations folk?

Team Harper has gone on to criticize Neil Young as being a bit of the pot calling the kettle tar-black;

"Even the lifestyle of a rock star relies, to some degree, on the resources developed by thousands of hard-working Canadians every day."

This is also true.  Just look at Mike Duffy, former fundraising superstar for the CPC - you think that sort of lifestyle comes cheap?  The same, incidentally, applies to former Ontario Conservative MPP Peter Shurman; his boss Tim Hudak wanted to keep Shurman's high-wattage star in Thornhill despite knowing he lived in Niagara; that kind of star power demands a certain privilege. 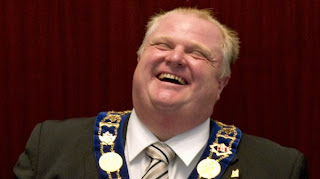 If you want to talk about Canadian celebrities, though, even Neil Young has nothing on Rob Ford.  Celebrities are supposed to attract attention and catalyze opinion (Ford or against).

Toronto's Mayor has become the world's most famous Canadian and loves the attention he gets; the problem is, being a a celebrity is really disruptive to the work of Toronto's Council.

More time is spent discussing Ford follies, more media ink is wasted on following the latest scandal than is being spent addressing the critical issues addressing the city - and the country.

Toronto has been repeatedly paralyzed due to the celebrity of its Mayor, much as Canadian Politics is often mired in the notoriety of its Senators.  Scrutiny is a good thing, but it's only part of the role of Parliaments and Councils - weighing the public's varied interests and setting direction and policy, one would think, are at least as important. Yes, Neil Young has generated headlines over his comments.  Yes, policy makers like Stephen Harper are telling him to keep his nose out of business that's not his.  But the Oil Sands aren't just about the economic opportunities for Oil Companies, the province of Alberta or federal coffers; it's an environmental and health issue as well.

In a democracy, such things are the public's business.  Given how cynical and disengaged Canadians have become due to the cynical spin of politicians and their spokespersons, any fan of transparency, dialogue and citizen engagement should welcome the intervention of non-political celebrities like Neil Young.

Love him or hate him, agree or disagree with what he says, Young's turning focus back to where in needs to be and catalyzing a conversation that our political celebrities and the Oil Companies themselves have failed to do.

So I hope Mister Harper will remember
As he puts old Neil down
That Canada's about more than money
That we're built on common ground.