Rob Ford in the Ring: An Alternative Interpretation of the Murder Video

Rob Ford is making a lot of headlines these days.  Of course, he's giving the headlines a lot of reason to favour him; lies, crack-smoking admissions, police surveillance, bad friends - the list goes on to now apparently include threatening murder. 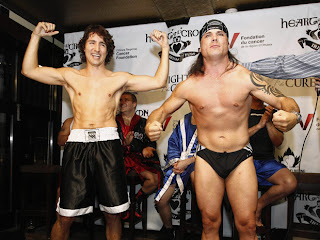 But in his latest video escapade, was Ford really threatening to murder someone, or was he trash-talking, kinda like Patrick Brazeau likes to do? (there are a lot of personality similarities between the two)

We don't have context for this video, nor do we have anything to suggest when it was filmed.

Despite Ford telling us he was drunk while threatening to rip someone's throat out, his behaviour appears more cracked out than inebriated (I take this from the Toronto Sun; I myself have never seen a person high on crack).  The full transcript of the video, which has obviously been edited, can be found here.

Ford himself has suggested he only smoked crack one time and wasn't cogent at the time that he did.  I think it's fair to say the Mayor's credibility is shot at this point, so his word doesn't mean much.  Having said that, we can still dig a little deeper into his general drug-use behaviour, courtesy of all the police material about his drug-dealer friend Sandro Lisi.

His name hasn't gained the traction Lisi's had - if there was any photo evidence linking Bahrami to Ford, I'm sure he'd be a bit more famous right now.

So, if we go on what we have, it's clear that Ford spent a lot of time with a guy who dealt in weed; we don't have any suggested evidence that he fraternized to the same degree with a crack dealer.

We do know that Ford did smoke crack - he has said so himself.  There has been no release of information from the police that suggests a regular pattern of access to crack (just the Mary Jane).  So, what context do we have around the one recorded time the Mayor did smoke crack?

That brings us back to the account of The Crack Video as provided by Robyn Doolittle and Kevin Donovan of the Toronto Star.  In their account, which has so far been vindicated, the reporters told us that Ford made homophobic comments about Justin Trudeau.

This led to the suggestion that the video was likely filmed at a time when Trudeau was in the headlines (so that the filmer, who may not be as hooked on politics as some of us, would have had Trudeau's name fresh in his mind).  Such times include Trudeau's Liberal Leadership win, and that time he kicked Patrick Brazeau's ass in a boxing ring.

What is the main throughline of Ford's comments (and those of the guy egging him on) in the new crack video?

Ford: 'Cause I'm going to kill that fucking guy.  I'm telling you it's first-degree murder.

Ford: But I'll fight him.

Ford says he's going to kill a guy in a one-on-one competition and the off-camera voice shouts out the name of a boxer with a violent reputation.  "I'll fight him", Ford says.

Ford: I just need to go fucking myself.  In my fucking underwear.  I want to go with this guy.  I just need 15 minutes, that's all.  No fucking interference, brother.  If I win, I'll fucking donate...

Go himself... into the ring?  Wearing underwear for boxing shorts?  No interference, as in don't help him once he's in?  He needs 15 minutes in the ring?  What was going to happen to the money raised for the fight - as I recall, it was going to be donated to a charity.

There's a line about the boys being pros, too - well, both Trudeau and Brazeau had previous fight training, so that's kinda what they are.

What if Ford's bizarre rant that mentions him in his underwear was trashtalk about what he'd do if he were to square off with Justin Trudeau in a boxing ring?

There's anecdotal evidence that it might not have been filmed the same day as the first video; according to Kevin Donovan, Ford was wearing a white shirt, top button open in that one - no mention of a tie, which does disappear by the third clip.

Now, to me the shirt Ford's wearing in Video #2 video looks soft blue, but lighting can confuse the two.  What do you think?  What do Donovan and Doolittle think?

The tie could have come off later, when they retired to the basement.  Or, it could have been another day, but around the same time the Trudeau/Brazeau fight was in the headlines.  Either way, it suggests that Video #2 was filmed before the whole crack-smoking story came to light.

Granted, the connections aren't airtight - there's the crack, the Trudeau/possible Trudeau boxing references and the potential that the guy egging on in similar ways/filming Ford is the same in both.
There's the by-election reference, too - which could have been leading in to the August by-election that Ford's former Deputy Mayor won (at one point late in 2012, Rob's Councillor brother Doug Ford considered running for the seat).

Add to this some basic sales - if it's already out there that Ford smoked crack/called Trudeau a fag, how much money can you expect to get for a video that just repeats an old message?  Editing it a bit so that it sounds like Ford's threatening to kill someone, however, gives you a new product and something the Star clearly felt was worth buying.

If that's the case, I think it's fair to say Video #2 doesn't bring anything new to the table (like a direct connection to the murder of Anthony Smith, though it doesn't disprove such a link either) - it merely expands on the existing sad story of a disturbed man.

Which is, in my mind, the whole point.  Ford is a mess - he has substance abuse issues that are killing him as he tries to cope with a position that's out of his league (which might just be why he's having substance abuse problems in the first place).  That's been the case since day one.

While we wait for the latest zinger to come out, heaping more shame on our Mayor, the man beneath the chain continues to wither.

"Are you waiting for this man to hit rock bottom?  ... Mayor Ford's a lot of fun to ridicule, but my guess is not a lot of fun to eulogize and that's where this thing is headed."

Ford's down, but he's not out - yet.  If he does die it's because we, his enablers and ridiculers both, stood back and let it happen.

Nobody will be joking about murder then.
Posted by Craig C-E at 22:34