Why Cars Should Be Considered Hes

The Harper Government is not fond of unions.  They block growth, demand the world and generally impede success through aggressive obstinance - right?

The auto industry, clearly, is a different matter.  They simply do a good job of selling their value to the Canadian economy.  Squeaky wheels and grease, so to speak. 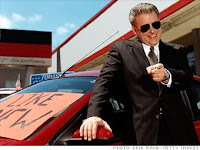 "The women don't come as often to complain.  The men do, so my experience is a little different in that I do think that more men put a fuss up about money than women."  - John Tory

The auto industry is subsidized beyond it's actual contributions to the economy, because they put up more of a fuss about money.  They complain, they threaten, they spend time, effort and money advocating for themselves - and as such, get more.

But is this overall a good thing for the Canadian economy?  Are we greasing the wheels at the expense of our economic chassis?  By heavily investing in traditional manufacturing, are Canadian governments impeding our national ability to innovate and growth into new opportunities?

Well, no - because if those new opportunities were so great and bountiful, clearly someone would be aggressively selling them to the laissez-faire purse string holders.  These innovators, social and otherwise, would be aggressively pitching, attending fundraisers, golfing and otherwise strategically hobknobbing with our socio-economic influencers.  That's the way the capitalist system works, right?

"More women need to invest the time in any capacity available to them to strengthen their relationships with colleagues."


By doing things like going out for drinks after work, weekend golf tourneys, all that kind of thing.

Which is kind of hard to do if you have kids.

It's sad how many competent, even excellent women I know in fields ranging from community consultations to government relations who are almost apologetic when they get pregnant, because they know it's going to place a burden on their employers.

Worse still is knowing how many working mothers (who don't make enough to afford nannies) simply can't go drinking after work or play golf on the weekends, because it's just accepted that they're primary caregivers - even when they are full-time employed.

To sum up, women who take responsibility for both work and family are punished because they aren't pushing themselves while men who take the time to sell themselves get the raise and the corner office.

Conversely, men who "act maternally" by taking responsibility for family and firm, putting the interests of both before self are marginalized.  They aren't man enough, you see - they don't complain enough or drink enough or go to the links enough.

I laugh when I hear people like Michael Hlinka talk about how employers reward value as a matter of principle.  We've got a very primitive notion of what value is.

But so what as along as the economy keeps rolling as it always has, I suppose...