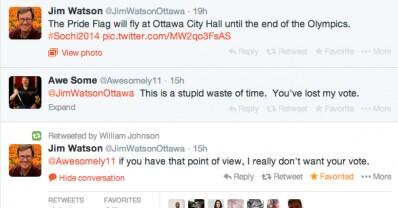 Full disclosure - I like Jim Watson.  I knew him when he was at Queen's Park and remember him best for going out of his way to be helpful to my then-MPP boss who, at the time, was facing some health issues.  This wasn't unusual; he was a caring guy, a fair boss and just generally a gentleman.
Watson is great at the retail side of the game (he wasn't called "Minister of Self-Promotion" for nuthin') but he was also adept at the policy and community support side of the game, too.  When he was Minister of Health (self) Promotion, he brought the whole concept of healthy living to the forefront.  He generated headlines and got in photo ops, yes, but never just for the sake of seeing his face in the bright lights; it was always done while communicating the thing he stood for.
And, as we see here, he has no problem with raising his voice against things he takes issue with.  Seriously - what retail-only politician would ever put the words "I really don't want your vote" in print?  They'd be worried about that quote coming back to haunt them.
Which, of course, is why we have such timid leaders on the stage today - they won't risk pissing off people they think might fit into their coalition of voters and so stay away from any issue they don't see as delivering a clear and present win.
There's this thing happening right now where government is fiscally tapped; from healthcare to employment to social services to justice, there's not enough money to do the job properly.  Even worse, the capacity needed to do the job well isn't there.
Whereas reactionary, monetary-economics minded leaders are touting cuts as the only solution (essentially throwing the baby out with the bathwater) smart leaders - some in the bureaucracy, many in grassroots community groups - are wrapping their head around behavioural economics first.  If you don't really understand how and why people spend money, after all, how do you know any given policy prescription will work?
As a result these leaders are striving to think and work smarter, in large part by building strategic partnerships to catalyze sustainable, shared solutions.  At the heart of this work is the "teach a person to fish" model - how do we empower people to have the skills, resources and self-agency to be their own best advocates and problem solvers?
There's no clearly established terminology around this space, but terms like "Open Government" are bumping up against "Virtuous Schemers" and "Creative Regeneration" as these forward-thinking start recognizing that somewhere in the middle, they're all pursuing the same shared vision.
The only thing that's really missing right now is a stone in the soup, some person or organization that's got the organizational savvy, the ability to pitch and get capital, the right kind of charisma and marketing skills - and of course, an unwavering commitment to putting the mission first.
Imagine that - a leader heading a group of people not looking to pick fights for partisan wins, but work with everyone to support strong individuals for a healthy society.
It's too bad Jim Watson already has a day job that he loves - we could sure use someone like him to turn these conversations into a movement.
Posted by Craig C-E at 13:29