Far Beyond the Stars, Black to the Beginning 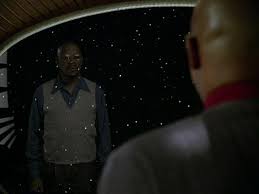 In response to the verdict, the hashtag #dangerousblackkids emerged on Twitter, with participants questioning a society where unarmed black kids are often interpreted as threats.
It's very hard to shake the beliefs of bigots.
Bigots automatically assume "ethnic" superiority over whoever it is they stigmatize, and as such can forgive any manner of inhuman behavior on their part.  An apex predator doesn't make apologies to mere scavengers, does he?
This means that they have no qualms bullying, undermining or threatening their quarry until they get the response they want.  If a bigot believes all black people are genetically prone to violence, they'll just keep pushing or denying rights until they prove themselves right.
Such is always the case with marginalized people - they are labeled as violent, lazy or hand-out dependent.  It surely couldn't be the conditions of their stigmatization at issue, could it?
Which is why I love #dangerousblackkids.  It's cheeky, it's viral, and it's non-violent.  It shows intelligence, social media savvy and equally importantly a sense of community - not just "black" but of everyone who dislikes bullies, including white kids from rural Ontario like me.  Such is the power of memes done right.
Instead of becoming that which you would stand against, you have to raise the bar higher.  If the only
way to extinguish the doppers is to reach new heights, so be it; let's keep on climbing.
Posted by Craig C-E at 21:05