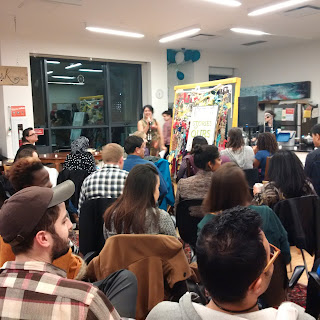 Are you worried about a Muslim invasion of continental USA?  Worried that there is a deep conspiracy between Muslims inside and outside of America, plotting to destroy the fabric of what makes (made) America great?  Fear that they're hiding in your very midst, masquerading as normal people - maybe even the President?

If you hold this to be true, I have a question for you - why don't you believe in the US Constitution?

There are Muslims all around you, whether you realize it or not.  It's kinda like how there are Protestants all around you, and Catholics, and Hindus, and Sikhs, and atheists.  People you know - perhaps even the same ones - might be first gen or second gen Americans, or 5th gen.  They may be gay or straight, like country music or rock n' roll.  These very same people may or may not like sushi, or children, or Michael Bay movies.

When you stop to think about it, really, it's pretty scary - you can't really tell what a person is or what's in their heart just by looking at them.

Let's ignore the Constitution for a second and say that your personal feelings of insecurity trump all - what can you do?

Even if you shut out the world, find some secluded corner to live in with people you feel look, think and act in ways you get, you will never know for sure if there's a secret something in your midst. You could turn a blind eye, I suppose, and ignore the things that make you uncomfortable - but the discomfort would remain.

This still doesn't solve the problem, because things like ideology aren't genetic - they're viral, and they can spread.  Let's say your kid is on the Internet and comes across Rumi, or sees a cute boy/girl on Instagram or Tinder who identifies as Muslim, or socialist, or whatever, and gets curious.  Starts doing some homework.  Maybe even starts considering whether Islam or communism makes sense to them.

What then?  Do you ban the Internet?  Do you work over-time to ensure you children recognize the evil presented by ideologies and viewpoints and lifestyles that don't mirror your own?  Or are you a big-picture thinker, and would rather make sure there are no corrupting, othering influences out there offering temptation?

How do you shut out or wipe out all that you see as un-American to ensure your country looks and feels just the way you want it to?

You would have to start by throwing out the Constitution.

We the People of the United States, in Order to form a more perfect Union, establish Justice, insure domestic Tranquility, provide for the common defence, promote the general Welfare, and secure the Blessings of Liberty to ourselves and our Posterity, do ordain and establish this Constitution for the United States of America.

A more perfect Union.  That is, the act of joining two or more things together.  Not one thing remaining the same, and everything else conforming to it; not the rejection of differences.

Common Defence - internal tranquillity, which means a focus on forming that more perfect Union, which implies the Union isn't perfect already.  Defence common - collectively defending the people, which is rather different than divide and conquer, which is the opposite of forming a more perfect Union.

Welfare, Blessings of Liberty and Posterity - of the people, for a more Perfect Union.

This is the American constitution, not some externally imposed doctrine.  It doesn't speak of conformity, of segregation, or of excessive impositions on religious groups - in fact, it speaks directly against those things.

Of course the Constitution was written in a different time, a more hopeful time.  The United States was an experiment, an innovation, a can-do attitude that rejected the notion that the people should be subjected to imperial impositions.

The United States of America believed in people first, and what they can achieve when they have certain liberties and a framework that encouraged them to work together and create a whole - a union - that was more than the sum of its parts.

So - who are the people?

What's their obligation?  To form a more perfect union through the promotion of justice, tranquillity, common defence and common welfare with the blessings of liberty being applied to all, now and for posterity.

Justice isn't equal.  Tranquillity isn't the goal - way too often, we see uncessary escalation in the interest of divisive beliefs.  Some Americans are being defended by the State while others are being denied justice and common welfare - so is it any wonder that tranquillity is absent?

The whole point of the Constitution was to lay out a dynamic framework that entrenched certain liberties and public responsibilities, allowing for the United States of America to remain strong, open and adaptable.

To fear an invasion of communism, or Islamism is, in essence, to deny the strength of that vision.

Which brings us back to the people.  For the United States to work, as an entity, it requires the people to internalize and live by the core mandate of the Constitution, which is to form a more perfect union.
That doesn't happen without empathy and compromise, by all parties.

It doesn't matter if you are a fifth-gen American or a new American, the same principle applies - the union of the commons comes first.  Justice for all is essential.  The common welfare and common defence are inherently connected.

Which is all just words, unless the people put them into practice.

The United States is, by its very nature, a virtuous conspiracy between people, seeking common ground and equally adapting for the development of a more perfect union.

To believe otherwise is, frankly, un-American.  And definitely unbecoming in any person seeking to lead the country.