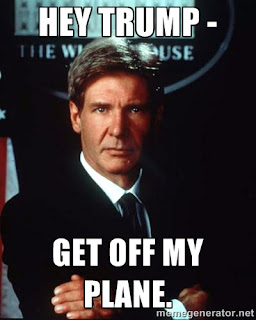 Hilarious, but not surprising that Donald Trump thinks real life is like the movies.  His own life, however, is a bit more Goodfellas than it is Air Force one.

Donald Trump is used to living in the sort of fictitious world reserved for the hyper-rich or for celluloid characters.  He thinks Michael Bay is a military strategist, not a movie maker.  He makes fun of veterans, though he's made a point of never serving himself.

Wonder how many other pop-culture figures see the would-be president as less substantial than the characters they play?