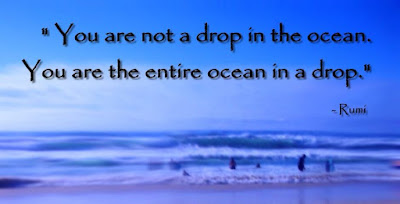 Great little SM campaign on how acts of terrorism are #NotInMyName.

Of course, the terrorists themselves don't care about that, and don't care about you.  They believe they are acting in the interest of a higher calling - either god, or themselves, or a mythologised world of the past where things were fine before sociology started happening.

There is value in campaigns against, there is also value in providing alternatives.  In politics, repeating the negative is often discouraged as giving airtime to the arguments of the other guy.  You want to throw the other guy off his message and stay on your message, which doesn't happen if you're chasing the narrative.

Easy - it's a message as old and as universal as civilization:

God is not the sword, but the stone.

The stone isn't the saviour - it's just the hook (or book).

It's not external - it's integral.  Yet it is nothing more than the hub of the wheel.

Stone soup.  Community.  Two names for the same thing, the thing that is all of us, that is what we are part of.

So, help me here - how might we hashtag that?