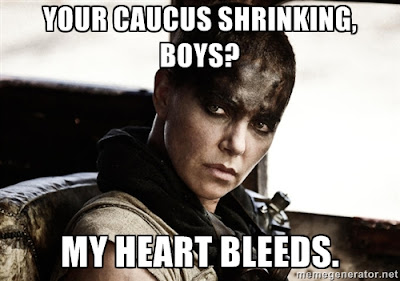 If you look closely, you can see a trend emerging.

John Boyega as the new hero of Star Wars?  Clearly, a black conspiracy to undermine white culture that must be stopped.

Mexicans at the border.  Terrorists at our shores.  Niqabs in our communities.  Gay people getting married.

And now, Justin Trudeau has determined that half of his Cabinet will be women.

The horror, the horror!

Funny thing is that the men crying foul tend to be the same kind that feel Oscar Pistorius was done in by a temptress, yet also hold to the line that toughness is about competitiveness and that poor/marginalized people need to suck it up and just work harder. The bottom line is this - the emotional argument that has supported centuries of white male imperialism (which is what it has been - get over it) no longer carries weight.  Those who have always had an unfair bias are being challenged in ways they never thought possible.

Suddenly, the "survival of the fittest" arguments that have justified white male dominance aren't as comforting as they once were.

A select group of the WASPy men on top are feeling threatened, and they don't like it. They're pushing back. They're trying to organize.

The shoe is on the other foot and suddenly, those who feel threatened find themselves doing all the things they used to deride other demographic groups for.

The best part, of course, is the response coming from the Charlize Therons and the John Boyegas of the world.  Get used to it, folks.

In short - they're doing exactly what the white men on top have been saying they need to do - hustle confidently and never back down.

You shouldn't panic, though.  Change doesn't have to be scary; ultimately, it's a healthy thing.  The natural order, if you will.

If it makes you feel any better, your kids will be totally comfortable with the new dynamic, and as a result more empathetic, more collaborative - more social.

And if it doesn't, well - we all know what happens to those who aren't able to adapt to the times, don't we?