Child Poverty: Why Youth Must Lead 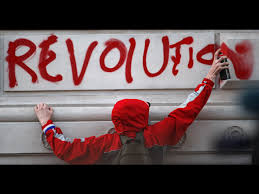 Teach every child to raise his voice
And then, my brothers, then
Will justice be demanded
By ten million righteous men.
Make them hear you.
When they hear you,
I'll be near you
Again.
Two headlines from today.  If you commit just a bit of sociology, you might even sense a connection between them:
“If ever there was a wakeup call, this would be it,” the mayor-elect says of a report showing city has highest child-poverty rate among Canadian cities.
Crippling child poverty.  That's a whole generation growing up in tense climates, without proper nutrition, without proper supports.  But clearly, this is someone else's problem, right?  Those parents should be doing more, working harder, hustling for cash, or something.  It's their own fault, right?  Nothing to do with us.
So long as governments keep taxes low and especially provide tax breaks to businesses, that'll create jobs - then people just need to hustle to get them and everything else will be fine.
On to story number two:
Some 73 students were suspended or expelled for bringing weapons to school over the past school year, up from 42 the previous year.
Guns.  In our schools.  What's behind this?  Are backwoods bigots from Pakistan invading our schools and using their mind control powers to make our kids bring weapons to class instead of pens? Is this a reflection of the erosion of Canadian values, or the Americanization of our culture?
Here's an idea: 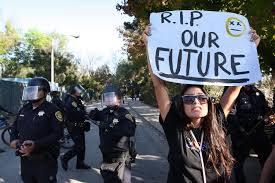 Chris Penrose, executive director of Success Beyond Limits, a youth outreach program in the Jane St. and Finch Ave. area, said he is concerned about violence among teens. But he said the weapons spike likely has to do with larger community issues, including poverty, education gaps and youth unemployment.
There is plenty of money in Canada right now; there are 118,000 millionaires in Toronto alone.  There are plenty of services - public, not-for-profit, corporate social responsibility - that exist, offering an alphabet soup of services.
And of course, there's the prevailing wisdom of our laissez-faire model of capitalism; in Canada, it doesn't matter where you come from, what hurdles are in your way, if you push hard enough you too can be one of the 118,000.  You gotta work hard, be willing to start simple, but above all you gotta hustle.
The implication, of course, is that if you don't succeed, it's your own damned fault.
Here's a term that will be familiar to pretty much anyone in town with responsibility for managing finances - ROI, Return On Investment.  If you can't see a clear, short-term return on whatever your investment might be, you don't do it.  Low-hanging fruit are therefore preferable; the least effort required for decent gains in short time frames.
Let's reframe that a little bit so that we're all on the same page:
- If you don't have resources - if you're poor, young, accessibility-challenged, whatever, the pressure is on for you to hustle hard over the long-run if you want to get anywhere in life.
- on the other hand, if you've had some success in life, long-term investments aren't worth your time; it's all about the quick-wins, the best bang for your buck, the low-hanging fruit.
For the haves, it all makes perfect sense - you spend half your life working really hard to gain success, but when you're there, you put the pressure on everyone else and focus on quick wins.
Now, picture you're a child who lives in a marginalized neighbourhood.  Maybe your parents were born somewhere else; maybe they grew up marginalized themselves, but in either case, they've invested time and energy - time away from their kids - and have nothing to show for it.  If anything, the amount of energy they've put into trying to get ahead and the frustration they've faced in not succeeding has bled into home life, which isn't great.
This is the lesson a youth can easily take away from this - the people with resources will tell you to hustle, but the truth is it won't get you anywhere.  In fact, this whole "you gotta come to me" approach to success is pretty much an excuse for those with power to stick to their low-hanging fruit and not share their millions.

What happens when you feel the people who are supposed to be the movers and shakers in town are making excuses to exclude you and our peers?  How much effort are you willing to put into getting an education, working crap jobs if you can find them, if you are never going to get where they are because society's designed to keep you marginalized?
Leadership is solving problems.  The day soldiers stop bringing you their problems is the day you have stopped leading them.  They have either lost confidence that you can help or concluded you do not care.  Either case is a failure of leadership.
This is worth pausing on.
Our society is anti-leadership, from the top down.  We have governments cutting programs, cutting taxes and cutting cheques on things like child care and mental health supports for veterans rather than making long-term investments.  We have bosses that are increasingly pressuring employees to be functionaries, content-producers, client-managers and business developers, yet training is not being provided and salaries aren't matching up.
Even in our education system, teachers are being told it's their job to be educator, mediator, psychologist and content-creator to massive classrooms that include children with learning challenges.  Parents are being told to do more, but do they have the resources, time, or cognitive/emotional bandwidth?  Are they too absorbed with work, or too depressed and frustrated from a lack of work to give their kids what they need? We can look to previous generations and say "they did it, so quit making excuses" - but without asking if it was a good process for them, or how the changing nature of work (who really has a 9 to 5 job anymore?), the rise of mobile comms devices and the soul-sucking challenges of gridlock play a role.
There is next to no leadership out there right now.  The people with power and responsibility don't want to be leaders - they don't care about their people's problems.  Sometimes they don't even care about their organizational programs, because they plan to be gone before they blow up (low-hanging fruit, remember)?
Or, they don't feel empowered themselves.  This can be justified in many ways (blame being a common one) but the basic fact is that they aren't, in their current condition, up to the challenge of leadership.
Some of them actually believe throwing the kids in the deep end is a good strategy, because that's how you identify the strong swimmers.  What happens to everyone else is one of those "not my problem" things.
Yet we desperately need leadership right now.
We're hearing the same things from every echelon of society; government is broken.  Infrastructure is screwed.  Organizations are a mess.  Yet those within those institutions will step up to the mic and tell us "everything's fine, we have a bold plan, just trust us and don't mind the man behind the curtain."

Back-of-napkin plans are being sold for their commercial value, not because they make sound structural sense.  Marginalized voices are being drowned out with top-down messaging.  Rabble rousers are being silenced through defunding, firing or even eviction.
Is it any wonder that youth are taking their cues from the world around them and realizing that if they want to be safe, if they want to have power, they have to be willing to take it through whatever means are available?
A kid not investing in schoolwork, being a bully and carrying a weapon aren't defying social rules of engagement - they're picking up on the socio-cultural cues around them responding in kind.
This is it; this is where laissez-faire capitalism meets behavioural economics.  In a game of competitive escalation and a reduction in personal investment, it's who's got the biggest stick who wins power and privilege.
And as of right now, there is no way, no one who can do anything to stop this trend.
Why?  It's the culture, stupid.
We have a silo-based culture, full stop.  Even those who talk about disrupting silos are really just trying to stuff more stuff into their silos.  Funding is there, but getting it is so competitive that an increasing amount of investment is going into competition, not solutions.  Lost opportunities, duplication, gaps and overlaps are resulting.  There are communities in this city that are glutted with programs and players, and yet the structural issues remain.  Why aren't we learning from this?
I question whether the people leading the charge right now are prepared to wrap their heads around the enormity of the challenge.  Even if they do care, the reality they grew up in and are living now is fundamentally different than the one being faced by marginalized youth today.
The best champions of any problem are those with lived experience.
Which comes to the crux of the matter, the core component of culture change, the disruption that is most difficult but most necessary.
The way forward isn't for more downtown adults to impose solutions on youth; if those youth aren't themselves leading the way forward, whatever gets built isn't going to work.
This requires a fundamental shift in the way we look at society, at ourselves, and at the role of power.
We always look for the best-in-show to invest in; they're most likely to provide the best ROI.  We then take them from wherever they are and put them in environments considered to be good for growth.
All of this is backwards.
We have to start focusing on those least likely to succeed with minimal effort and put them in the driver's seat.  That means going to their communities, learning to speak their language, taking them serious and treating them seriously.
We have to create the best environments where these youth are - in other words, don't bring youth to MaRS, bring MaRS to the youth.  That means more investment of time and interest - which, but its nature, requires motivation to want to make things better, not for a quick ROI, but because it needs done.
Which comes to the last, most challenging, most fundamentally important component of our needed culture change.  Right now, we see power as a form of wealth to be accumulated; power is something we want because, when we have it, we can get more through giving less.
That stops right now.
From this point forward, power isn't something to be obtained; it's blood to be circulated.  The same goes for money.
Here is John Tory's challenge - he needs to be the anti-Doug Ford.  He needs to step away from the practices that have brought him success in life, because it's not about him right now.
After years of seeking high office of some kind, of being the guy at the top, now is the moment for John Tory to show true leadership by stepping back and becoming a conduit rather than a capstone.
The same holds true for every person of influence in this city; councilors, Executive Directors, CEOs and talking heads.  We need to be empowering leaders, not giving orders.  We have to be cultivating solutions from the grassroots rather than imposing infrastructure on top of.
This is not a lofty vision, nice words on a page.  It's a fundamental necessity.
Our society is crumbling and the solutions we're coming up with aren't good enough.  We are failing the next generation, and they know it.
If we aren't prepared to empower youth to lead, there will come a day not too far from now when they will simply take what they want by force.  That is, after all, the lesson we're teaching them.
The choice is ours.  The consequences will be ours.
Either way, it will be youth that lead.
Posted by Craig C-E at 11:32