Indeed, Raynolds said he was suspicious that the woman was up to something from the outset of the Canmore meeting, in part because he was sure he'd seen her at an earlier meeting in Airdrie — although he says she told him that was her look-alike cousin.
A post I previously wrote about Constantinidis' encounter with Andrew Leslie is being much viewed today - probably due to the post above.  In my previous post, I framed that encounter as a positive thing, an example of agonoism - tough questions meant to further dialogue and explore all facets of an issue, ensuring robust conclusions and appropriate policy as a result.
I'm experienced and/or jaded enough to know that wasn't the intent, mind you - our politics is all about the gotcha moment where foes are concerned and circling the wagons in political omerta where our own tribe is concerned, throwing someone under the bus as a last ditch effort to maintain the status quo.
But that's not a frame that's sustainable and not one I want to reinforce.  Unlike some out there, I actively don't want to add fuel to our burning platform.  I'd like to think we can think far enough ahead, plan far enough ahead and be agile enough now to avoid the complete collapse of our system.
Then again, I'm no delusionally-confident partisan pitbull.  I'm the sort that fully expects aggressive tactics like the ones apparently employed by Constantinidis and built on by Kenney and co to blow up in everyone's face.
So let's step back a bit and look at this in context.
It looks like Constantinidis has intentionally gone in looking for "gotcha" moments to embarrass Liberals.  She's ready to record.  She's asking questions designed to solicit answers that can be positioned as negative and passed on to Sun News to trumpet to the world.
From one point of view, this is fine, as democracy should be - we theoretically want to be having an open conversation in which representatives and would-be representatives who impact policy decisions state their opinions so we can get a sense of who they are and how they think.
Of course, this frame of politics is naïve.  It implies that politicians want to be judged on their own merits and be chosen by the people only if they measure up.
That's nonsense.  Politicians want to win.  Political Parties want to be government.  They want to frame themselves for the win, not for public interest.  They want to control the narrative, not passively accept the public's choice.  There's nothing laissez-faire about politics.
Which leads to the other point of view - that the more we play gotcha politics, the more real opinions go underground.  We end up with carefully controlled messaging, spin and opaque policy conversations that lead to things like in camera committees and omnibus budget bills.
These are all anti-democratic - but then, so is focusing on wins at all costs.
According to the version of the story now being circulated, Constantinidis lied to a public official so as to carry out her clandestine mission; she faked her name to get in and even said she was her look-alike cousin when called out.  It's not clear that Raynolds was the person who issued the "beer and popcorn" statement, but this fact has been ignored by the Brian Lilleys and Jason Kenneys of the world.
From their perspective, it's not their job to tell the other side of the story - that's the Liberals' job.  Their job is to make their side stick, to frame the narrative, etc.  It's war-room politics, full stop.
Think about that for a second.  They don't feel responsible for the truth, only their version of it.
I would argue that goes against the basic premise of individuals being self-contained rational actors, as it implies truth can only be achieved by collaborative action.  I'm fine with that.  But there's something else that I do find troubling.
How old is Constantinidis?  She looks like she's in her 20s.  Her LinkedIn profile suggests she's a student until at least 2017, provided it's a match.  Her Facebook, surprise surprise, isn't so accessible right now.
Are we to assume she acted entirely alone, lying, playing gotcha politics, etc?  If so, where did the idea of lying for a gotcha quote come from?
Are we to assume Michael Sona acted alone with the Robocall scam?  If so, where did he get the notion that such actions were acceptable?  Do we blame mommy and daddy, or is there a suggestion he's just a bad seed?
What of Sebastian Togneri?  I actually know his parents - they are kind, honest people who are active in their community.  They would never condone abuses of power, nor instil such values in their children.
If we are to accept that these three young people were self-contained in their bad behaviour - or, better framed, bad behaviour they were caught out on - how did they get to positions of influence?  Where Constantinidis is concerned, why would she have assumed that acting in such a manner was a way to build her brand and get ahead?  Is she right on this?  If so, when did loyalty to Canada via a partisan party become more like Mafioso omerta?
Clearly, this has nothing to do with riots on the streets in Ferguson; what's happening there has nothing to do with a culture of entitled insiders playing the game for internal wins at the cost of social sustainability.  There's no need to ask hard questions about the failings of our culture; not when we don't believe in culture.
We keep hearing that politics is broken.  In fact, it's a line being parroted by tough political alphas to define themselves and hammer their opponents with (just don't look behind the curtain).  It's not their fault; nothing is their fault.  They're just playing the game as it's designed - and playing to win. 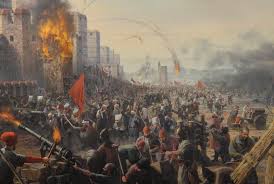 When we see youth pushing the envelope of political dark arts, it's time we step back and consider how we've gotten here, where it's going to lead, and if it's a place we're prepared to go.
Because, mark my words - this is no longer a "kick the ball down the field" to another generation thing; those leading the charge of our democratic decline are going to be alive and kicking when the consequences of their actions come home to roost.