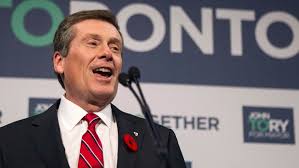 “We have to forget the team sweaters. Whether it is a Scarborough versus Etobicoke team sweater, a left versus right sweater or a New Democrat or a Liberal sweater I want people to work together to build up the city.”

Remember that video Team Doug Ford took from Why Should I Care? wherein Tory talks about road tolls?  When you watch the whole thing, you see that the substance of what he said then mirrors his quote posted above.
While I question some of the choices he's made and wonder if he fully understands the challenge he's presented for himself, I have no doubt that John Tory's intentions are pure.  Tory is an aspiring post-partisan; he's seen up close and personal the divisions that partisanship can create and the limitations fixed ideologies place on our ability to understand and solve our structural socio-economic woes.
Unless you're a die-hard partisan, you want John Tory to succeed as mayor.  This is our city, and he will be our Chief Magistrate.  Holding him, Council and the public service to account is part of our role as people of Toronto, but it doesn't end there - we need to bring our ideas to the table and be a working part of the solution. 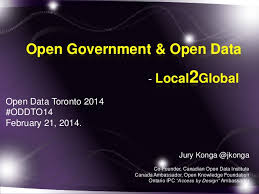 In that vein, I would encourage Tory to look beyond the sweaters of partisanship and actively wade in to the different communities of the City, too.  He needs to be engaging directly with the people of Etobicoke, and Regent Park, and Alexandra Park in their spaces, in formats comfortable to them.
The same goes for the city's social entrepreneurs, CSR leaders, etc.  This doesn't mean the odd powwow with the Ilse Treurnichts or Tonya Surmans of the world (though they're definitely worth engaging with) - it means creating regular opportunities to engage the Andrew Dos, Bianca Wylies and Shilbee Kims of the world as part of the solution-generation process.
Tory should also tap into some of the talent and visions of some of the candidates who didn't make it into cabinet.
Alex Mazer's work with Better Budget TO is astounding and, with the full partnership of Team Tory, can have an even greater impact.
Andray Domise's vision for Techsdale is great and needs to be implemented; it also fits in nicely with the visions of other community leaders for Youth Entrepreneurship hubs possibly based out of underused TCHC/TPL spaces in Toronto's NIAs.  Then, of course, there's Toronto Youth Cabinet's Chloe-Marie Brown and her three big policy ideas for 2015.
Alejandra Bravo continues to make a difference among Toronto's New Canadian communities, empowering more civic engagement and literacy.

On the civic literacy side, we go full circle back to Why Should I Care?  Terri Chu has done an amazing job developing one of the most important forums for dialogue in the city.  Rather than pitting opposing perspectives against one another, new ideas and information are shared through conversation. Instead of exploring a battleground, common ground emerges.
Wouldn't it be great if we had more WSICs throughout the city?  Or if the City (Mayor and Councilors, City Planners, etc.) engaged in regular forums like this to engage, inform and hear from local communities?
Getting informed and getting engaged are crucial, but we need to go even further.  To really make a difference, people - all people - need to be an active part of the decision-making process.  That's what Reset Toronto has been hinting at; it's also what Toronto's Open Community, which represents a variety of sectors and communities, has been trying to promote.

Last night, I had the privilege to be part of TGIFTuesday, a policy kitchen conversation which brought a mixed group of people together to craft some policy actions to bring to Council.  Partners included Social Innovation Generation, the Centre for Social Innovation, Swerhun and Toronto Youth Cabinet.  The new Council will be getting a white paper based on the ideas generated there and there will also be a video in the near future.

We're all committed to doing more of these and in more communities throughout town - it would be awesome to hold such events at local entrepreneur centres/community catalyst hubs.
All of this is breaking new ground, doing things differently and embracing the idea of iterative development.  In short, it's risky, it's a bit messy - but it's doing exactly what Tory want to see, which is breaking down silos and bringing people together.
We all need to take off team sweaters from left to right, but we also need to be comfortable engaging both above and below our social strata.  Tory's political advisors will probably discourage this - it goes against the political mentality of picking fights and reaching strictly for low-hanging fruit - but it's what the city both needs and deserves and, I believe, what John Tory ultimately stands for.
The Mayor-elect is welcome to join our conversations, events and hacks whenever he has the time.  We're happy to work with anyone committed to the same cause of building an informed, engaged and empowered society.
After all, the only way to move forward is to do it together.
Posted by Craig C-E at 09:34