When we compare that with the current process, Canadians are essentially being called upon to convince the minister, Pierre Poilievre, to change his mind when it is already made up - an exercise that is pointless and fruitless.

Not every solution involves a hammer, but the Intelligencer hit the nail on the head here.

Laissez-faire capitalism relies on everyone serving their own selfish interests.  That means those without power, wealth or access tot he levers of government have to push even harder to raise their concerns with those who hold actual clout.

That would be fine if everyone was a sales-oriented predator, but they're not.  Society couldn't function if everyone was an alpha - if we're all selfishly taking and selling, who's providing and developing? Rob Ford wants two-stop subways and an island airport expansion, full stop.  He doesn't care about facts that challenge his positions and sees everyone who points out the flaws and gaps of his logic as an opponent.  Push to get ahead, step on those in your way - that's how business works, right?

The same is true from the opposite direction in the case of John Tory's golf gaffe.  As a boss, Tory expects the people working for him to dedicate some of their precious, paid-for work time pushing him for raises and spending even more scarce personal time sucking up to him on the golf course.

Instead of, you know, actually visiting them from time to time and seeing what and how they're doing himself.

Tory's version is how our system works, which is why that system is failing.

Leadership isn't about sitting at the top of the hill and fighting off all challengers until someone beats you; it's about building a platform that raises everyone to their maximum potential in a coordinated, efficient way. 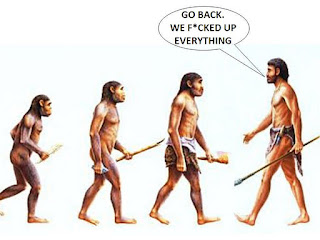 Evolution isn't and never has been about survival of the strongest - that's a myth society's aggressive people feel is true and clearly have a stake in perpetuating.  Missing from their equation is the concept of symbiosis - a pretty important feature of any ecosystem that you can miss if you keep your blinders on.


In an ever-changing world, it's that which is best able to adapt (and integrate) which survives.  Where does adaptation come from?  From diversity, including of skills, abilities and perspectives.


Society doesn't and can't work if everyone is competing with each other all the time.  That's why the larger any society grows, the more specialized and collaborative it's people become.

Can the functionally fixed pseudo tough-guys like Rob Ford or Pierre Poilievre get that notion into their beans?  Probably not - they don't appear to be cognitively flexible enough to change their views.

Which is why they will ultimately be left behind.

It's a social evolutionary thing.