Is Open By Default Magna Carta 2.0?

As a result, while our recommendations are few in number, they are ambitious and practical.  Taken together, we believe they provide a foundation on which the government can build an agenda to change how business is done.

Some of our recommendations may make government uneasy.  We recognize that, but real change should be unsettling.  And, in any event, we think Ontarians are ready for it.

Open By Default: A new way forward for Ontario is just a report, arranged and paid for by the Government of Ontario.  Said Government can choose to ignore the whole thing if they want to, sticking this report on a shelf to collect dust with countless others that have come before it.

And quite frankly, from both a political and clay layer bureaucratic level, there's much reason to ignore the whole thing because many of the recommendations, if implemented, would lead to some uncomfortable reveals and require some anxiety-causing culture change.

But, as Lenihan said, that's the point.

Politics as usual is letting us down.  It's letting the politicians themselves down, as has been clearly indicated by reports such as the MP Exit Interviews done by Samara.  Increasingly, the focus is shifting from anything even remotely resembling decent policy to blatant partisan positioning, rhetoric and factually challenged messaging. 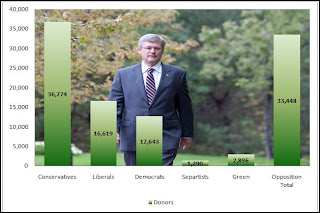 And it all costs money - lots of money.  Money that could otherwise be going to actual charitable causes, to children's education funds or to support social entrepreneurs.

Political Parties have become capitalist enterprises, pushing for more and more donations for the return of a sticker or a sweater, with the end goal being to put their CEO on the throne.

The publicly paid-for staff closest to leaders are wholly partisan operatives, nudging actual public servants and elected officials away from serving the public interest and instead delivering wins and slug-lines for the Party.

Ask them why.  They don't know why.  They'll tell you it's all about getting a leader in charge who will best be able to support one class or another, but scratch at that message a bit and you'll find that immediately underneath lies nothing but more pushes for money and ambitions to entrench one Party or other into the national fabric in perpetuity.

And this makes sense - because partisan politics is all about winning, full stop.  A Party can deride an Opposition position with gusto and then assume it themselves without batting an eye, if they think it serves their purposes.  They can decry wrongdoing in one Party at the same time they employ the very same tactics themselves.

Why?  How can politics be so cynical?

Because Harper was right; Canadians fundamentally don't care about how the system works, but this is only because we can't see how it works - or fails to work.  We can't see just how much money and time is wasted by lateral departments that don't communicate, work at cross-purposes or establish programs based on narrow mandates and include embarrassing excuses for metrics.

We might know sub-consciously that by and large, any consultation processes are token exercises to foster the illusion of listening, but we don't see how that plays out in real-time, or over time.  It's not crystal clear to us how poorly the left and right hands of government fine-motor skill is missing.

But it could be.

With Open Data, every transaction, process, tidbit of information shared would be open by default.  It's not a process of micro-managing individual bureaucrats - it's a matter of illuminating the systematic flow of information to identify where the blockages are and fix them.

More than that, Open Government will fundamentally change the way information is aggregated, analyzed and acted on by ensuring the people have a collective say.  This isn't to say we get whatever we want, which should never be the case; people aren't rational actors, which is why laissez faire capitalism is such a bust.

No, the point is that we can communicate what we want, be encouraged to see how our pieces fit into a bigger picture and plan accordingly.  In this model government becomes a conduit, a facilitator, ensuring a balance of responsibility and action that best reflects the needs first, and wants second of the people.  Which is how our democracy is supposed to work.

Magna Carta was the first step taken in Britain to wrest absolute power away from the Crown and provide it for the first time (not return it) to the collective people.  It's important to remember that before William the Conqueror there really was no State to work with and people functioned much more independently.  Increasingly complex society, however, requires increasingly complex (and, to actually function, representative) governance.

Partisanship was not part of this system.  Partisanship is a political convention, not a policy law.  And increasingly, it's getting in the way of good governance.  Funding gets allocated based on a few ideological/vote-winning tricks, only to be shifted when power switches, meaning no big-picture work gets done.

As we're seeing in Ontario, the political culture has become so toxic that schoolyard taunts are now being met with threats of legal action, reducing the capacity of ideological opponents finding common ground.

They may feel they have no common ground to stand on, but they're wrong.  There is one land, we all inhabit it together, and if they can't work together, they've become part of our collective problem.

Open Data presents a real challenge, a culture change that partisans aren't open to; it implies a loss of power and a level of accountability they aren't interested in.  This is why we haven't seen as much traction for the Open Data Movement in Canada as has been the case in other jurisdictions.

But it's not about what's convenient for the partisans; it's about what's good for our country, our province, our communities.

Partisan operatives may not feel the need to consider the recommendations of reports like Open By Default and may not see value in respecting the opinions of elected officials, but those elected officials know that they will never get a Minister's position if they don't first win a seat - and that relies on votes from citizens more than it does money from the Centre.

Like weeds cracking through old cement, there are individuals and groups at all levels within the entrenched system trying to implement change.  They're leading open lives, proactively engaging on social media and trying to open up their data as best as they can.  Within politics, there are some Members and staff who are tired of the constant pressure of playing Machiavelli and would welcome a return to a properly functioning democracy.

There's not so much will, though, because there's not enough demand.  It's the political special interest groups that dominate their attention and hold their feet to the fire.

If we ever want to get out of the hole we've let partisans dig our democracy into, it's we, the public, that needs to step up.

Governments can ignore reports like Open By Default if they feel there's no pressure to act on it.  But if Open By Default were a position with a million signatures of rank-and-file citizens from every corner of the country, that would be a different story.

Especially if, courtesy of open data, you could map out those signatories and show how much demand for openness was concentrated in places that partisans need to curry favour to win government.

If we truly want change, we have to stop waiting for the powers that be to deliver it to us.  There is no power greater than that which we wield collectively, as the people.

Real change is possible, as unsettling as it may be, but it's up to us to demand it.

Are we ready for it?