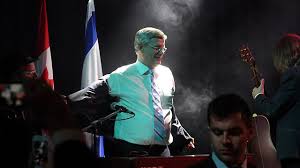 There’s no doubt that building those big programs was a difficult and messy enterprise. And by disentangling Ottawa from social and health policy, the Tories may well be making matters neater. They are doing this without much fanfare, quietly and incrementally — often simply by not acting — and thus largely without debate or public consideration of the consequences.
Karl Rove once declared that Conservatives like himself were history's actors; progressives would be stuck studying the impacts of Conservative actions.  The basic premise of this approach is exactly the same as that of, say, a Saddam Hussein, Muammar Gaddafi or the ISIL gang, but I digress.
I don't think Stephen Harper sees himself as being in the vein of a Karl Rove, or a Dick Cheney.  He probably feels he's a lot smarter than either of them are.
And his biggest weapon, his secret advantage, the master stroke of his strategic genius has always been this - back away.  Do nothing.  Talk big about whatever, because if you say it confidently and frequently enough while denouncing your opposition, people will believe you - but when it comes to brass tacks, just stop doing things.  Wherever possible, stop things from happening, period.
Has Harper changed Canada?  Of course he has, in much the same way as Toronto Council has changed things like public transit or wastewater infrastructure.  Neglect results in change.
Harper doesn't see himself as one of history's actors - that's too pedestrian for a genius Machiavelli like him.  No, Harper is more like a producer, calling the shots from the sidelines and doing so through production cost attrition.
I'll say it again - Harper is a one-trick pony, and always has been.  His success comes through the actions of others; on his own, he's the guy pouting in the washroom waiting for someone to budge.
You can call that many things, but leadership is not one of them.