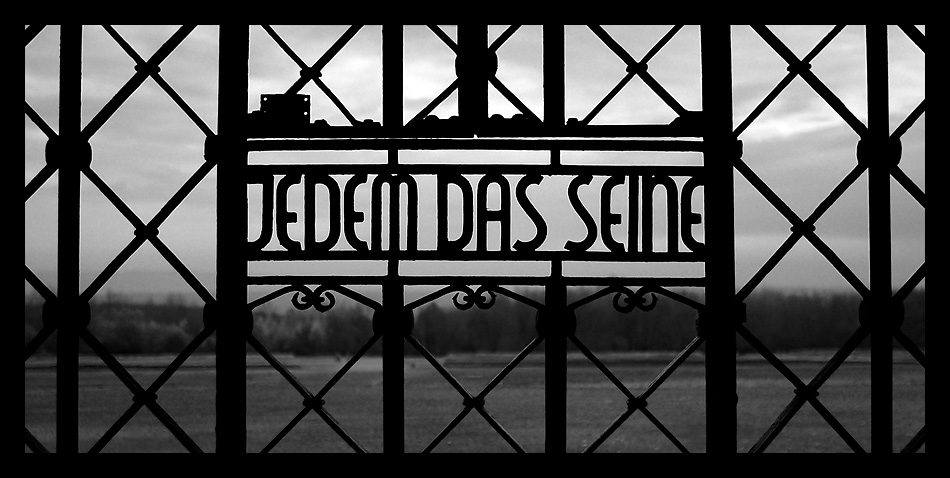 Every man for himself is not going to work.  It's time to start organizing.  We need to figure out how we're going to survive here.

Last week most of us were strangers.  But we're all here now.  And God knows how long we're going to be here.  But if we can't live together - we're going to die alone.

This weekend an international group of survivors, family members, organizers, politicians, ideologues and media will be congregating in the small, historic German city of Weimar.  My grandfather Ed Carter-Edwards and I will be among them.

We will be there as invited guests to commemorate the liberation of the Nazi Concentration Camp Buchenwald.

My grandfather, as you may know, is a survivor of Buchenwald.

As ethnic hatred and political violence grows like a cancer in European countries like Greece, Hungary and Russia warns of war in the Ukraine as bigger players start to resume Cold War posturing, we will be remembering the tragic human toll hatred caused the last time Europe went to war with itself. I've been to Buchenwald several times.  My first visit was in 2001 as a backpacker;  I remember vividly the first time I walked down the steps to The Hanging Room beneath the crematorium.  On the walls are meat hooks from which inmates were hung with piano wire.

The first time I walked into that room, I couldn't breathe; it was like air refused to enter a space where such horrors had been committed.


Before that visit, Buchenwald had just been a name I'd heard associated with my grandfather - we'd never really talked about the Camp, or what he had been through while he was there.


The chill I felt just walking into that execution chamber was the catalyst that made me want to learn more.  As I've come to understand the significance of the space and its place in history, and as I've come to learn countless personal stories covering the spectrum from desperation to determination, Buchenwald has woven itself into my life as well.

Buchenwald is a cold place in April.  A damp, chill wind blows across the Ettersburg, always bringing a frigid rain with it.  It isn't hard to imagine how miserable a place it must have been for inmates in any season - no winter clothes, often no shoes and for some, no shelter to escape the invasive cold.

Many people died of the elements in Buchenwald; countless more died from starvation, illness, overwork and of course, by being intentionally killed by the Gestapo guards who ran the Camp.  The total recorded death toll of Buchenwald is 53,926.

But it's just a number.  Numbers can't convey human loss; they only numb us to the people and stories lost to man's inhumanity.

Every single survivor of Buchenwald can tell a heart-breaking story of their time in the Camp; of the horrors they experienced, the pain and humiliation they felt, how they were completely dehumanized or how they banded with others to fight back.  I don't think I've talked with a single survivor that doesn't carry the terrible, sometimes debilitating burden of survivor's guilt.

While Buchenwald is still the same physical location and even some of the original buildings still stand, it carries a different air about it now.

This is especially true at times like the commemoration, when survivors return, as they do in fewer numbers every year, to be celebrated for their endurance and embraced for their stories.

It becomes a bit of a media spectacle, with people like my grandfather getting scrummed by international media outlets all wanting a piece of their story.

The Memorial puts survivors up in nice hotels, buys their food, takes them on tours, has specially-trained guided to help make their visit as enjoyable as possible.  It's surreal; people who were dehumanized as inmates of Buchenwald get celebrity treatment when they return for related events today.

There are obviously and understandably part of these survivors who look forward to going back, to the superstar treatment they get and to see old friends.  At the same time, there is something validating about having their story actively listened to.

I know that for many survivors, including my grandfather, they were told to forget what they went on and not talk about it.  Telling a horrific story like that might scare off friends and hurt one's chances of employment.

Conceal, don't feel, keep calm and carry on.  It's a bit like expecting someone to ignore being hit by a car and carry on their lives no matter what injuries they've sustained without a proper healing/restorative process.  It just doesn't work.

One of my strongest memories from my visits back to Buchenwald is of another survivor, a friend who has since passed on.  He was a quiet man, friendly and funny in an understated way.  He loved to tell a good story and loved to pose for pictures with his grandchildren around the Camp.  We all got to know each other over repeated visits - it's like a community, the survivors, their family and friends.

One visit, we all decided to take a walk to the old Camp quarry to see what it looked like.  My friend's granddaughter had never been but knew he'd worked there and wanted to experience it first hand.

We got about half way there when my friend the survivor stopped dead in his tracks, almost like he'd bumped into a wall.

"I can't," he said, and burst into tears.  Thinking about the quarry had triggered a memory of pain and torture he'd probably suppressed for decades.  He seemed to shrink on the spot, physically reverting to the starved, beaten form he must have been when he worked there.

He could go no further.  His granddaughter brought him back to his hotel room, where he stayed the rest of the day.

At the height of its operation, Buchenwald became a very tribal place, and that by design.  The Nazis understood the value of that age-old mechanism of oppression - divide and conquer.  They separated and branded inmates by ethnicity and specifically targeted "undesirables" like Jews, Gypsies (Sinti-Roma) and Gays.  These were the minorities every oppressed tribe could look down upon, giving them an outlet other than rebellion.

Of course, the notion of "each man for himself" - Jedem das Seine, the phrase on the Camp's gate - didn't stick.  Even in the worst of conditions and faced with a constant struggle for survival, or perhaps because of this struggle, people came together for common purpose; to regain their humanity.

I stick to this point, because the reality of it haunts me.  Each man for himself was engraved in the door of a Concentration Camp where divide-and-conquer was a method of control.  Are divisive, partisan politics and micro-targeted campaigns not on this same spectrum?  Where will the path we're on lead us?  What state will we leave our nation in for our children?

At one point in his stay, he became very sick with pleurisy and was sent to the "infirmary" which, in practice, was really just a place of dying.  It was through the efforts of another inmate, a doctor, that my grandpa survived.

The doctor, at great risk to himself, found a syringe and extracted fluid from my grandpa's lungs.  That, and he helped him connect with the Camp resistance who got him out of the infirmary, got him listed as "deceased" and then hid him in one of the barracks.  It's really an incredible story - one of risk, redemption and heroic deeds in a dark time and place in history.

Stories like my grandpa's are common to Buchenwald - among the inmates, but even in some cases among the guards.  I've heard more than a few tales of Gestapo who conveniently missed when they were ordered to execute prisoners.

Why they did it, we'll never know, but part of me likes to think that those guards recognized that they were losing their humanity too and decided that was something too valuable to let go of.

This will likely be the last time I visit Buchenwald with my grandfather.  I don't say that with certainty, because my grandpa is one incredibly resilient man.  I've made the mistake of thinking "he won't be well enough to return again" a couple of times and he always proves me wrong.

Ed Carter-Edwards have proven  a lot of people wrong in a lot of ways.  He has every reason to be bitter, resentful and even hateful to Germans; he isn't.  Equally, he has every reason to despair the heart of darkness that many lies just beneath the surface of the human condition; he doesn't.

Most importantly, to me - he has never lost his belief that the world can and must be a better place and that only by working together can we, as people, make that happen.

Despite everything he has been through, Ed Carter-Edwards has escaped the horrors of Buchenwald unjaded.  I think of this every time I hear a tough-minded political operative or business person justify cruelty by saying "that's just the way it works."  It may be the way the system functions, but it doesn't have to be that way.

This weekend, a dwindling group of survivors will be going back to Buchenwald.  With them will be family and friends - people like me who have come to know and become part of the inescapable presence that is Buchenwald.

We will trade stories and develop new memories for the sharing.  Most importantly, we will remember the lessons that Buchenwald and all places of human atrocity echo throughout time:

Each to their own doesn't work.  What makes us resilient isn't our ability to compete against each other, or eavesdrop on each other or bomb each other from a safe distance - it's our ability to survive the ravages of history through the stories we create.

The past cannot be forgotten, but we are not doomed to live there.

The future?  Let's write that story together.