Government: It's Not a Race, Stupid!

But remember when the 1,500 metres was a tactical race in which runners jogged the first three laps, before settling in for a dash to the finish.  Not anymore.  It's now a long distance sprint.  You spring from start to finish or you're left up the track.

So it is with the modern mayoral campaign in the country's most saturated media centre, in a municipal campaign of Olympic proportion.  Go hard or go home - without climbing the podium.

For all those folk who tell me I'm too positive/need to rant more, here you go.

Politics/sports comparisons drive me up the wall, make me gnash my teeth and utter the odd profanity.
Seriously, people?
Let's think a bit about how we view actual sports.  They're like a religious ceremony, a rite of passage, something removed from yet parallel with the rest of society.  Like a doodle on a painting or a stain on our memory, we don't want to see them in any way sullied with something as mundane and dirty as politics. 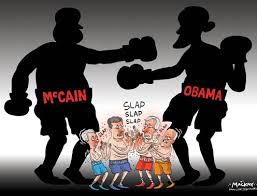 That was a common refrain from Sochi, wasn't it?  And how many other international sporting events before that?  The Olympics is about national brand/the athletes; it'd be unfair to them and bad for our global standing not to be in the race.

"I remember being angry," Stockwell says, "taking it out by bashing through the water, and then thinking, 'Why am I training even if we're not going to go?"

All those poor athletes who invested so much time and energy into competing, we wouldn't want to deprive them of their opportunity, would we?  It should be about them and their competition, regardless of what's happening in the world around them.

It reminds me an awful lot of how the campaign team that worked to nudge John Tory into the race "put a lot of effort into this and will be very disappointed" if they didn't get to run.  If you look around the political landscape, you'll see organizers who get mad and turn against their team if they're left on the bench; same holds true for MPs who want a kick at the Ministerial can but aren't given the chance.

We talk about bench strength, don't we?  You want to have the best potential communicators on your team and need to make sure the nomination processes are designed to provide them - rather than people who are best able to represent their constituents.

We do use sports analogies for politics all the time - it's competition, its races, it's clocks counting down and tricky strategies to beat the other team.

Professional sports is one of those very rare fields where participants aren't allowed to have anything resembling personal lives - they're all-in if they want to win and if they aren't, they don't belong there.  For their efforts, they aren't really expected (or even welcomed) to engage in different fields - their job is to keep their heads down, perform, and entertain, not pundify on political issues.
Funny enough, the same applies to hardcore political operatives - they're all about the win, too.  They will dedicate their lives, sacrifice their relationships and hit up their family members for donations, maintaining a laser-like focus on the win.
Except they aren't athletes and the choices they make/actions they take with their blinders-on functional fixedness impact real policy decisions and in turn, everything from taxation to infrastructure spending to public service delivery.

How many times have I heard war roomers talk about "picking fights" to take potential threats out of the race or mobilize their base?  It's like they're living out their failed hockey enforcer dreams, except in our Legislatures.

In the audience, that's where - as passive participants, cheering for the Reds or Blues, Greens or Oranges instead of proactively engaging in policy conversations around things like healthcare or foreign aid.

Maybe people want it this way - maybe they'd rather see politics as a bloodsport, something to be watched or avoided, but not engaged in.  Political operatives certainly want it this way - they constantly tell us we're not interested in the political sausage-making process and work hard to keep their training regimens out of sight. 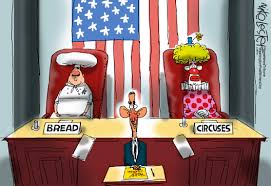 But this isn't democracy.  Democracy isn't a spectator sport, it's civic engagement.  In democracy, leaders fuel their teams who in turn are supposed to engage with the audience in a conversation that results in the best outcomes for everyone.

This is critical, because society is far more complex than any sport; when you choose to view politics as a simple competition between leaders and teams for market share, you're not looking for sustainable solutions.

Which is where we are now - increasingly competitive political parties that, surprise surprise, like the idea of reducing competition and adding more games per season, as that's where they flourish (and get paid).  They want more of your money so they can fight more effective campaigns, buy more ad space and put out more attack ads (of course you hate them, but they work, don't they)?
The focus here isn't on shared solutions, but individual or team wins.  The public are spectators, not participants.  Sustainable policy choices aren't even part of the conversation.
This is why I cringe at the adoption of political primaries - essentially, big game days - into our process.  The last thing we need is for citizens to have another reason to fully embody the role of side-line pundicators and jersey-wearers.
You want entertainment?  Watch an actual sports game.  Crave scandal?  Go watch Game of Thrones.
Democracy is not a fucking game.
When we treat it like one, we all lose.
Posted by Craig C-E at 13:55