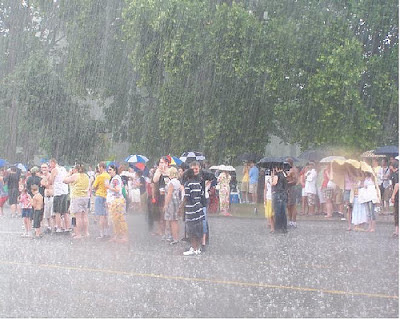 "But the future is still not here, and cannot become a part of experienced reality until it is present."

Yes and no.  If you are here, you are not there - but there still exists, doesn't it?

To be less abstract; if you're leaving home for work, your workspace still exists whether you are there nor not.  When you're between locations, both home and work exist simultaneously, but you're not at either one of them.

To use another analogy, let's say you're in a crowd, watching a parade.  As the middle of the parade goes by you, the beginning of the parade still exists - it's just moved beyond you.  Exactly what the floats and performers are doing down the road may differ from what you saw in the fine detail, but essentially it's the same thing.

This holds true for the end of the parade you've yet to witness; it exists and is being experienced by another group of people in much the same way you'll experience it, with some variances.  What exists in front of you at any one moment is different than what came before or after, but the whole parade exists simultaneously.

From a physics perspective, time is like that parade; it's a fourth dimension which lies beyond our ability to perceive, but it's there, like dark matter, whether we perceive it or not.

The moment you drop a ball, it has not touched the ground - but you can safely predict that it will hit eventually.  Unless, that is, it's intercepted by something, like a baseball bat.  The speed and trajectory with which the ball is thrown will premeditate the outcome, as will the perceptiveness of the person holding the baseball bat.  These are all factors that need to be calculated to successfully predict the outcome of when and how the ball will touch the ground.

In sports, war, love, business - every human endeavour, really - we are constantly trying to wrap our heads around the factors that will impact events.  What will a competitor do?  What will the market support?  What "play" is the opposition going for?  Which tactics will the enemy employ?

This brings us back to time.

It's possible the speed at which the parade moves will vary; it's likely that the exact performance you get will be different from what someone who saw it before might suggest.  You can argue that unexpected circumstances, like a terrorist bombing, can throw the parade off entirely, but so far as time is concerned, bombers are just performers in the line, same as any other.

There was a time when humans turned to omens and myth to forecast the future; rituals and sacrifices to gods became tools to shape the future.  As we progress, science has begun to replace such magic, helping us better predict (and plan for) weather, emergencies, health and security events.  We know the next ice storm, epidemic or political election is coming; the more we work at it, the better we get at knowing when and ensuring we're prepared for it.

After all, you can't put your life on hold or skip the parade just because it may rain; not if you truly want to life.  Instead of waiting out the storm, plan ahead.