What are we holding on to? 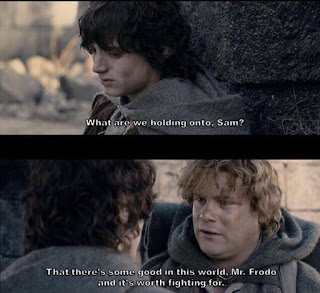 "We think they hold on for their families," he said.

This line is going to haunt me for a while.

Periodically, people ask me how it is I stay positive, how I stay focused on what can be instead of wallowing in what isn't, how I keep going when it can often feel like I'm shovelling water.

The most honest answer would be "I don't."  I have my dark moments, just like everyone, and probably darker than most on rare occasions.  To steal a quote - my doubts are for myself.  I know that people aren't asking to find some magic tip or strategy - ultimately, what they want to know is that there truly is something worth fighting for.

Which, ultimately, is what hope is.

That is what so many people are looking for.  When they think they've found it, they throw it against the wall, put it under the microscope and sometimes just walk away because they are afraid that it might not be real.  It can be really hard to believe that hope can be anything more than a delusion.

The notion of putting your faith in and being vulnerable, completely vulnerable to an idea that's about as tangible as a thin ray of sunlight on a cloudy day is frightening.  We don't want to take the risk of hoping that things can be better because the disappointment of finding out we were wrong, silly, naive to do so is terrifying.

I live in the same world as everyone else does.  I see the same realities, hold the same conversations, read the same headlines.

And I don't just hope that things will be better - I know they will be better.  100%.  In fact, there are countless amazing, inspiring stories out there right now that show hope is always, always present. Yes, there is war, strife, bigotry, famine, genocide, injustice and all the rest of it in the world.  Yes, there are some truly frightening scenarios emerging out there - everything from the frictions between global communities as the world becomes a more integrated place to climate change.  The world of 2067 will look a lot different than the one we recognize today.

Yet the basics of humanity have never, ever changed - kind deeds, shared moments, helpful neighbours, all the the good that is embodied by that most universal of directives, do unto others as you'd have them do unto you.  Except it doesn't need to be prescriptive; we don't need to know there's a win for us on the other side.  We just need to be human, and the rest happens by default.

We need to believe in ourselves.  We need to recognize others as being just as human as we are, with the differences a matter of software, with most of it being helpful for our own growth just as what makes us unique can benefit them.

It's a bit like being a parent, or being a child - both are teachers, both learn from each other and help the other grow into new roles in life. Particularly at this moment in history when the individual has often been reduced to gears in the economic engine, appreciating how a child sees the world can remind us of what really matters.  And of course, parents have a wealth of experience from which children can learn and adapt from to navigate the world and make it their own.

What is the special relationship between a parent and a child, or a couple, or friends, or partners? That bond which enables us to see the health and happiness of a wholly separate person as critical to our own well-being?  It's not a transaction.  It's not a strategy.  It's a state of being.

That state of being, of course, is love.  To love someone else is to put them first; to support and relish their victories, to be heart-broken and supportive at their losses, to be grateful for their very being.  It isn't to pander, or to not challenge, but always to nurture, even when the best way to nurture is to let go.

To love another is to make a sacrifice - but only when that love exists in a vacuum.  When love is reciprocated, and shared, then balance is found.

Love if faith and faith is the cornerstone of hope.  When you love others as you would love yourself, you seen in them the best of what humanity has to offer - something that is, truly, divine.

That's when it becomes clear that hope isn't an external fantasy, but an internal manifestation of that thing that binds us all together, whether you think of it as a feeling or a force or a greater consciousness.

What do I hold onto that keeps me going?

Family.  It's as simple as that.

And my family has no borders.  You, in fact, are family.

How can I not be hopeful when I know we're in this together?