Political advertising is a powerful tool for swaying minds.  The infamous Daisy ad is a famous example of this.  Thing is, political advertising costs a lot - there's the ad buys themselves, but also the talent that goes into designing the things, and pollinating them across mediums.
As Daisy Consulting founder Warren Kinsella has said, though, "the most important campaigns are the ones that don't cost a thing."  These are campaigns that can be nudged by people with narrow agendas but are largely driven by public engagement.
Today, this concept of the public carrying a message forward that benefits an organization in some shape or form is called "user generated content" - UGC for short, because acronyms are cool that way.
UGC campaigns have the potential to reach massive audiences and change the narrative in ways political ad campaigns don't.
You may be dismissive of the impacts #beenrapedneverreported had, but you can't deny the penetration our broader discussion around harassment and, as a consequence, male/female employer/employee has blossomed.
Maybe the chatter will die down - clearly, there are executives who are banking on this - but all it will take is another high-profile incident, of which there will always be some in the offings, to bring the conversation back to the fore in earnest.
The same holds true of #ICantBreathe, which builds on #Ferguson, #MichaelBrown and other publicly-generated narratives that emphasize the racial divide in the US and how the justice system largely lands on one side of it (meaning, it's not actually justice).
This is all online stuff, though.  Not everyone is on a computer and what happens online doesn't necessarily translate into real-world practice, does it?  You can play Sim City for days and never have that life touch your real life, right?
What happens when a hashtag or a meme becomes the focal point of civil protest?  The die ins we've seen as a response to #ICantBreathe are an example.  There have been talks and presentations and probably revitalized funding for women's rights and anti-harassment activities as a result of #beenrapedneverreported. 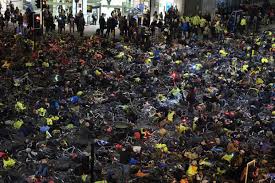 Online activity can and does translate into real-world engagement.  And what that engagement looks like is pretty amazing.


What does it remind me of?  The same thing any protest reminds me of: 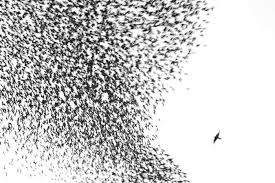 This is a murmuration of starlings.  To the right, you see a predator that would take out the weak links in the starling formation, if it could find one.  As it stands, however, the hawk doesn't know where to begin and certainly doesn't have the tools to break up the formation, if they stick together.
Which they do.  It's a survival instinct, really - the ability to group together in the face of external threats.  The very notion of stepping out from the crowd is to risk predation.
Back to politics for a second.  "With us or against us" is a tried-and-true narrative; you're with Party X, or Party Y will destroy your way of life.  You're with us or with child pornographers.  There's no middle ground to stand on, no room to move independently, even if there's elements of the overall package you disagree with.  We win or they win - which side are you on?
The State, of course, is supposed to be on the side of citizens.  The Justice System is supposed to be beyond sides - justice, blind, etc.  Yet increasingly, the UGC narratives - the social murmurations - we're seeing are presenting a growing community beyond the usual suspects standing on the side of those they are officially told are the problem.
Men have gotten behind #beenrapedneverreported.  White icy league kids are getting behind #ICantBreathe.  People in the financial sector are speaking out against the failings of capitalism.  Even elected officials are suggesting our current model of democracy isn't doing its job.
There's a bigger picture taking shape, here, if you want to look for it.  Doing so requires a bit of sociology, mind you, but it's worth doing so - for self interest.
After all, altruism is selfishness that plans ahead.
And the only sides that matter in the long run are "that which adapts and survives" vs that which does not.
Inevitably, history's actors are relegated to the past.
Take a deep breathe, folks, and strap in - we're in for quite a ride.  At least we're taking it together.