Investment and Social Impact: The Garden of Innovation

"Founder Henry Chong started the company Revelo Electric which specializes in electric bikes for urban settings. His idea, which started as an undergraduate thesis project has come a long way."

Technically speaking, an undergraduate thesis isn't R&D.  It isn't market research. Yet how many start-ups are emerging from ideas or needs first explored in academic settings?

Then there's Figure 1, which is a brilliant idea that bridges the gap between professional peers communicating relevant information and end-user privacy/info security.  I won't go into the massive growth potential of this App here.

How many innovative, problem-solving and potentially massively profitable enterprises have emerged from non-product oriented processes?  A ton.  Meanwhile, the money governments are pouring into financial incentives to nudge traditional private-sector players to be innovative isn't having much impact.

Also, the increased pressure on what used to be Not-For-Profits to be financially stable on their own (through sales, not grants) isn't making organizations more lean, it's denigrating services.  Pure science as a profit-focused tool?  All we're ending up with is less science and fewer idea opportunities.

This is a good thing for the survival-of-the-fittest mentality of our current government - they feel that this shrinking of the pool increases the financial viability of what actually emerges.  But where beyond talking-points is the evidence to support this?  Where are the metrics?

There are none.  It's an ideological perspective as removed from reality as the idea of communism.

You can't motivate innovation with financial pressure.  It doesn't work; neurobiology and evidence from countless studies prove it doesn't work.  Instead, what financial carrots and sticks do is encourage more "fake it 'til you make" it hustlers who talk the talk, but tend not to provide metrics of distance covered for it.

So why do we have a government with access to massive amounts of data and professional support actually impeding the sort of innovative success that any economy should want?  Why, instead of heeding the data, is this government stifling its collection and undermining it's presentation?

It's not particularly rational, is it?

And that's the point.  When you know you're right and endlessly confident in your righteousness, anything that disagrees with you feels wrong.   When you're impatient for wins, the objective becomes the removal from your path of that which feels like an impediment to victory.

There is a world of difference between wanting economic success and wanting power.   If you see money and wealth as the conduit to personal power, then getting lots of money fast becomes the objective.  Iterative development, learning, exploration, etc. become frills, time wasters.  All that matters is the low-hanging fruit.

Innovation isn't about the low-hanging fruit; it's about figuring out how to reach the higher-up fruit.  Or teaching yourself to garden.

But not the guys like Henry Chong.  They're not in it for them; they're in it for what they can do.  What we can do.
See, you don't buy innovation, you nurture it.  Supporting innovation is more like growing a garden than building a tower.

And the people really interested in strengthening our economy are ignoring the Stephen Harpers of the world and spending time with the Henry Chongs.  Some are even funding them, turning Corporate Social Responsibility into R&D, merging social innovation and user-generate content.

Something to think about. 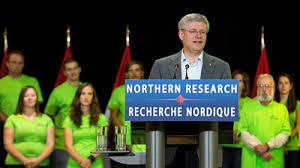