"It was a set-up," Fantino said.  "The union exploited these folks and that to me is reprehensible."

So it turns out there is more than one side to this story, and now it has been reported.

I'd like to be baffled; I really would.  For a Minister (who has been accused of jigging his expenses) of a Party that has built it's entire brand around exploitation (Illegal Coalitions?  Dying MPs? Their own health policy as fodder for fundraisers?) is more than a bit rich.  Surely, this level of hypocrisy is unprecedented, shocking and something Team Harper would feel an urge to repent over.

But no - it's business as usual, just another day on the Hill. 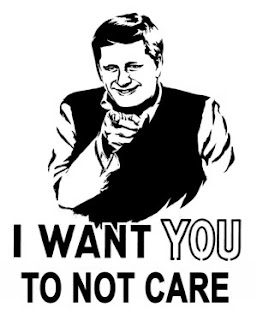 Politics is all about simple, standardized and often-repeated messaging.  It's what politicians deliver and, sadly, it's all a great host of them are prepared to listen to.  If you get 20 different stakeholders each impacted by the same issue, but telling different stories, a Minister/their staff are liable to say "see, they all want different things, so there's nothing we can do here - it's status quo and let's move on."

So any advocacy group that is good at what they do works hard to speak the language of politics, which means standardized, oft-repeated messaging.

The same goes for the fact that veterans had their tabs paid for.  This is all business as usual, too - I've been involved in many campaigns where individuals impacted by certain policies or who would gain from new ones were keen to participate in face-to-face meetings with government officials but couldn't afford the trip.

As organizations behind such efforts are meant to support their "clients" or "members" it's a natural part of their mandate to facilitate such visits through subsidizing or covering travel and accommodation costs.  I'm going to be accompanying my grandfather, a World War II vet and Holocaust Survivor to a memorial service at the former Buchenwald Concentration Camp in Germany this April, paid for by the German taxpayer.  Is that a cynical manipulation or the fulfilling of a social responsibility?

Of course, Julian Fantino knows all this, as does Stephen Harper and every other politician on the Hill.  They will also be aware of the fact that many veterans are suffering from their policies and legitimately concerned about how they're being treated.

If Fantino truly put veterans' best interests ahead of partisan ones and truly believed his policy approach was the right one to take, as a leader you'd think it would be imperative for him to clearly demonstrate that respect and make the effort to empathize with these veterans and go to whatever lengths necessary to explain why he felt his approach was the best one.

Leaders don't decide, sell and defend - they discuss, decide and then do.

But that's not what happened.  Fantino showed up late - that wasn't the Union's doing.  Seeing that the people for whom he is, as Minister of Veterans' Affairs, responsible for were upset, Fantino could have sat down and given his guests the gift of his time and made it clear, in person, that he does care.  Such an approach would have undermined any manipulations by the union and demonstrated his clear intent to the veterans who were right there in front of him.

Instead, he got accusatory.

Now that this whole incident has become yet more fodder for the press - in addition to demanding the spouse of a soldier who committed suicide repay some of her disability cheque - Fantino had yet another leadership opportunity where he could have put the veterans first and focused on explaining why he felt his approach was correct.

Instead, he went on the attack, as his Party tends to do, dismissing the real emotions of the veterans themselves and instead focusing on blaming the Union.  By accusing the union of playing the vets as pawns, Fantino is doing the exact same thing.

Why?  Because he, as Minister, felt wronged and as such, felt compelled to defend himself.

This is not leadership.  The only time leaders put themselves first is when it's in the line of fire.

It shouldn't have mattered what the union's intent was; he is Minister, not them.  It has always been in his power to be the leader instead of a player, but it's not to be.

Frankly, there aren't many leaders on our political landscape at all; everyone is content to play the rules and cut corners in the partisan game that has led to the decline of Canadian democracy.

There's a reason why Canadians are so cynical about our politicians, and this is it.

I'd say Fantino should be ashamed of himself for failing to live up to the responsibility of his office, but it would be a waste of breath.

We don't do shame or responsibility in Canadian politics any more.

But we desperately need to.  Responsible, democratic governance is what our veterans have fought to defend.