To beat Donald Trump - and, rest assured, we need to, because he is currently winning - we need to dramatically change the focus.  We need to stop over-reacting to every loathsome utterance he makes, because our over-reactions help him.  We need, instead, to start focusing on changing the hearts (such as they are) and the minds (ditto) of the angry old white men who support Trump.

Yes to everything Kinsella says, with a bit of a shift where it comes to research and implementation.

Warren Kinsella - author of some decent political strategy books based on his decades of experience in political war rooming - wants the focus to be on finding the things about Trump that will really piss off the Trump base and send them running to someone else.

Such an approach is cutting off a manifest symptom without looking at the disease.  It does this, in no small part, because of the general assumption of politics - that whoever gets in power wields the levers of policy and can shape the landscape as they want.  It's an unspoken truism that any self-respecting politico would deny if questioned because they know, consciously, that it rings false.

I'm a firm believer that the increasingly top-down political approach has fuelled the frustrations of the masses, Trump constituency and otherwise.  Politicians present themselves as the only one who can make things right and their opponents as ticking time bombs.  The people have only one simple choice to make - who will make choices for them?

It's a mentality that has its roots in traditional hierarchical models, like feudalism; there's someone at the top who calls all the shots, and then people who argue against those calls and want someone else to make the calls.

There's no small irony that those who are the most anti-government, anti-authoritarian invest so little agency or social capital in their broader world so that a top-down government is really necessary. Sometimes, it's a matter of historical reality - they've never been listened to before, no matter how many marches and protests get media play, and they're not truly being listened to now.  For the Trump constituency, it's more a matter of people like them always having been the decision-makers in the past; there was general comfort that whoever was headman of the tribe would still be of the same tribe.

Such is no longer the case.

Trump's constituency is getting behind and staying behind Trump because it is in their nature; they want to be as passive as possible yet still have the world function in the privileged way it did before. That means privileged access to everything (except from their perspective, the frame is that their legitimate entitlements are being taken away and given to less-deserving demographics), the right to treat the world like a Boy's Club, making racist jokes and having people applaud, not chastise them, to cat-call with abandon, so on and so forth.

What they don't realize is how weak their position makes them.

Survival isn't, never has been about strength.  These would-be Alphas are nursing stone clubs and beer bellies in an age when the opposition has design thinking and nudge theory at its disposal.  They can't win in a fair fight, but then they've never had to engage in a fair fight.  Privilege has always been their privilege.

Here's where I suggest an approach that's different from Kinsella's, full-well realizing that he's won more battles for the throne than I have played even a peripheral role in.  I'm not interested in the throne, or the next win.  I'm interested in changing the game, period.

Don't view Trump as the champion of WASPy men.  View him as the embodiment of all their weaknesses.  He's boorish, self-absorbed, thin-skinned, combative, ignorant, bigoted, all the rest of it. His wealth was inherited; his only skills in life are bullying people into doing things for him and building his brand through standard divisive tactics.  That's it.

Trump has never created anything.  He's never innovated anything.  Trump has never inspired anyone to be a strong leader - he hasn't the slightest clue what leadership is.  Above all else, Trump, like all Alphas and especially the colonialist-mentality Alphas, is completely dependent on other people (which is why he's a bully).

Trump cannot make America great again, because greatness is a concept beyond his grasp.

He relies on a system that enforces pacifism among the people.  He needs to be top dog, with everyone else orbiting him.  Trump sucks up energy and weakens the systems in which he exists.

Take a look at Syria's Assad - his ego and his strong-arm tactics have devastated a country.  His inability to lead has decimated a proud nation and turned its people into victims.

America is currently on that spectrum; so too is Canada.  Responsible governments have recognized this, which is why there's been such a strong push for Open Government and new forms of civic engagement.

Trump doesn't know how to engage - he only knows how to shout.  He's a one-note bully, a parody of a man.

Not exactly the image we want for ourselves, is it?

Making Trump the enemy only vindicates the self-narrative of his core constituency, which is why attacks on him only reinforce their narrative.  He is "their guy", the head of their tribe, and any attack on his person is interpreted as an attack on their tribe.

Kinsella's approach is to create a wedge between the tribe and their head man; it's an approach that can work, but the tribe will find a new head man.  As Kinsella states, there are always men like Trump out there, ready to step in.

Trump is not a disease - he's a mere symptom and should be treated as such.  The system that makes passivity possible, that enables colonialist mentality - that's the problem.

The goal isn't to beat Trump, then beat the next Trump, then the one after that - it's to fix the system so that there is no need nor space for a Trump, period. 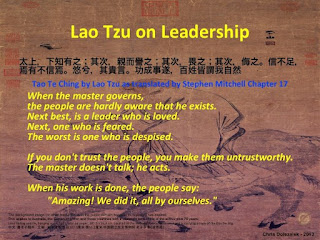 Which means Trump isn't the focus - the people are.

This is where Trudeau has, in some measure, gotten it right; he didn't use military analogies and put Harper in his crosshairs.  Instead, he focused on society as a whole, a vision of what this country can be and how people can disrupt and gain from the process.  Even the white males, because in giving up a bit of power, giving up a bit of their perceived entitlements, they can become something more than Head Men - they can become leaders.

You'd be surprised the difference people feel when they are respected rather than feared, are thanked rather than resented.  Today's true leaders already know this.

You will never beat Trump, or Trumps by playing the game that favours them.  We don't want to do that, anyway, because their game is part of society's current failings.

Instead, we need to change the rules of the game.  The best way to do that is to admit there's another player at the table and help them be at their best.

What does this mean in practice?

It means talking to and about Trump like a symptom.  He deserves no more than that, and the people who've bet on him deserve a lot more.

They should be the focus.  Helping them recognize that the social changes that are occurring cannot be reversed, nor do they really want them to be.  Why?  That's the tricky part.  This is where true leadership is necessary.

Fortunately, the story of America provides ripe fodder for those leaders to pull from.  America has been great, and done great things.  Smart people from around the world have moved to the US and disrupted the global status quo, innovating in science, arts, policy, process, etc.  Understand who America's greats are and what shaped them and the story becomes clear.  At its best the US is a home and spring board for anyone who wants to do great things.  Anyone, no matter where they come from.

America's diversity and its culture of being the world's marketplace is what makes it great.

You don't have a successful marketplace by putting up walls, limiting entry and smacking down anyone who comes forward with a new idea or product - which is what Trump's bigotry is all about.

- A vision for what American can be rooted in its own mythology.
- Disrupting the system, empowering those who feel unempowered with a caveat of responsibility, but with clear rewards as a benefit
- Trump (comes last) as a symptom.  He speaks, a response frames how his approach is actually part of why America is atrophying, and segue back to 1 and 2.

You won't stump Trump by playing his game; you will make America great again by focusing on Americans.