What Syrian refugees bring to the table

It is our hope that this video might help shift the conversation from what these refugees cost (what other challenges they might bring) to a conversation about what we are gaining by welcoming them to our countries.

It's a sad fact -the bullies always get more attention than the bullied.  When we talk about oppressive regimes, or war-torn countries, the people are often the B or C story.  So when we do talk about, say, Syrian refugees, it's in the context of ISIL, or Assad, or war in general.  They are refugees, they are potential terrorists - we view them through the frame of the bully first, rather than focusing on their own narratives.

Back in 2001 while backpacking through Europe, I spent a fair bit of time in the former Yugoslavia making friends and hearing stories.  One story stands out in particular - a couple of English teachers talked about being students when war broke out, and how it slowly creeped into their lives.  They were doing their homework, thinking about the things they wanted to do, the boys that annoyed or intrigued them; the war was an over there thing until one day, a bomb exploded near their homes and blew out their windows.

The main thing they wanted me to take away - we aren't war people, they said.  We're people.  We want good jobs, and families, and to enjoy our friends.  We didn't want the war and while it has shaped us, it doesn't define us.

It's no different where Syrian refugees are concerned. 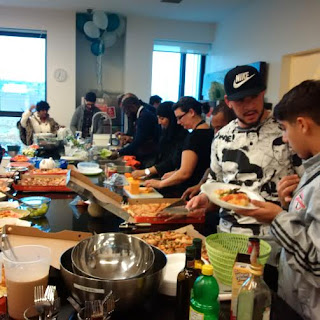 We can choose to look at them as victims, or as representatives of a society at war, or as being somehow associated with ISIL - but is that how they define themselves?  What are we losing out if we choose not to understand these new Canadians for what they have to offer as well as what they have lost?

At its best, Canada is an incubator of ideas, solutions, culture.  At it's best, Canada represents the confluence of the best from everywhere else, a salad club of opportunity.

It's easy to forget this latent potential when we focus on what we have to lose.

Thank you to the TSO, Jeff Melanson Kinan Azmeh for reminding us that our humanity is something we have in common, and that in welcoming new Canadians we all have much to gain.