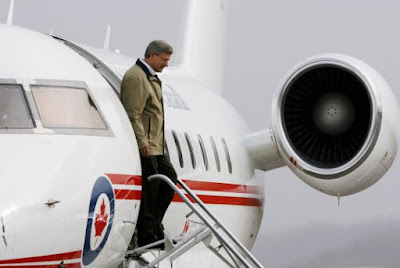 Previous Liberal governments' use of the luxury planes was among the things Harper used to needle them about when he was opposition leader.
But once he became prime minister, he would use the planes to fly his own family across Canada and to the U.S. for hockey or baseball games or purely partisan events, flights for which the taxpayer was reimbursed, though whether that was done fairly was often in dispute.

Harper either missed the subtle genius of this move, or he's past caring.  I'm leaning towards the former.

There is no official sound bite of Harper admitting that he lost to Justin Trudeau.  That was by Harper's design; he knew any such clip would be played, ad nauseum; you can't spend years decrying an opponent as light weight and not expect that to be thrown in your face when he beats you.

Despite how mean-spirited Harper was to Justin Trudeau, by all appearances Trudeau has been magnanimous in victory, with this last flight just one more example of our new Prime Minister taking the high road.

Though there's nothing written that you can't accomplish two things at once.

Allowing Harper one last flight is, in my opinion, the right thing to do.  It will also be much more painfully obvious of who the adult in the room is if Harper's successor and former caucus maintain the mean-spirited tone of their former leader in spite of such gestures.

Beyond this, though, there was no way to avoid the media's scrutiny of Harper's history with the challengers in light of this last flight.

He was against them until he made solid use of them - much like he did with the Senate.

Harper has always been against excess - and yet here he is, taking one last turn on the taxpayer's dime.  Is this a reflection of Harper as a hypocrite, or has he come, finally, to recognize the importance of such sociological phenomenon as altruism and consideration?

It doesn't matter.  For all Harper's careful avoidance of providing the world a direct quote admitting that he and his bitter politics were beaten by sunny ways, we now have this story, this image to focus on.

One would assume that Harper understands the power of symbolism.

Anyhoo, we wish him well in retirement - or, as seems to be the case, some time spent as a teacher.

For the rest of us, it's onward and upward.