Behavioural Insights and the Niqab ban 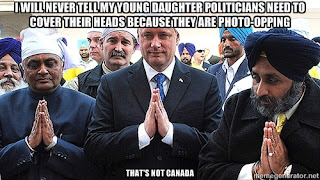 Let's be clear - Harper did not tacitly say that he would tell his young daughter that women don't have the right to cover their faces, if that's what they so choose.  What he did say was this: 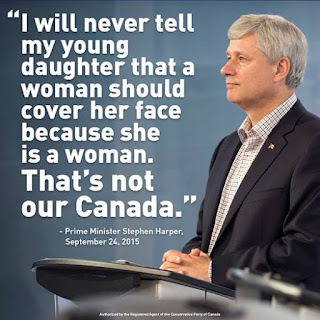 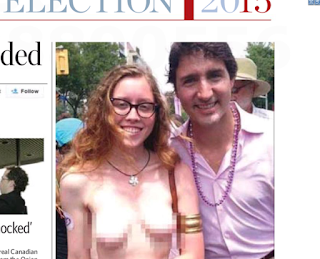 Trudeau had the right to take his picture with this woman, just as Harper did not.  Although Harper is running for public office to represent all Canadians, he's under no obligation to have his picture taken with anyone he doesn't want to.

If Harper is uncomfortable being around topless women, he's under no obligation to do so.  Lucky for him, there aren't that many topless women kicking around, or he might end up being in their presence whether he chooses to or not.  Heck, if all women went around topless - as is their right - Harper might have pictures of himself taken with bouncing breasts everywhere he went, unless he decided to cloister himself in his office more than he already does.

It's okay that nudity makes Harper uncomfortable, just as it's okay and even understandable that some women aren't comfortable going topless in public, or showing their décolletage in general.

Harper has the right to go topless, but not the responsibility to go topless.  It's not just about freedom of expression, it's about personal comfort and safety as well.

And we all know Harper's big on safety and security, right?

Harper probably would tell his daughter to respect her body; he may even opine that dressing suggestively could draw untoward attention that could put her at risk, or at the very least emotional discomfort.

What happens, though, if she goes out in public wearing regular, non-revealing clothes and gets cat-called anyway?

If he hasn't seen this video, I would recommend Harper give it a gander.

As a man known for avoiding situations that provide uncomfortable attention (like public meet-and-greets or media scrums), I'm sure Harper can empathize with this woman and, by correlation, all women.

Because this kind of untoward attention happens all the time.  Just because they are women.

Unlike Harper, women can't simply avoid public life to escape this kind of untoward attention. Ideally cat-calling, staring, etc, would simply stop happening, but that is unfortunately not realistic.

So what can they do? 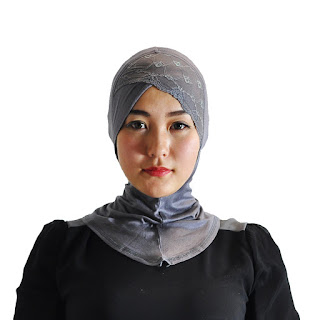 Do women have the right to cover their bodies - to dress conservatively, as it were - to avoid undesirable attention?

Of course, the woman above didn't go out of her way to dress provocatively; she did quite the opposite just to prove a point.  Some men are going to seize on what they can get to oggle; some will purposefully poke at women they feel are "teasing" them by covering up.

As the picture to the right demonstrates, you can dress conservatively and still show beauty to the world.  That shouldn't be a bad thing, but if it garners you undesired attention, you might opt to cover up further.

By the same token, it's not uncommon for people who don't want untoward attention to wear hoods that bury their faces; this provides the advantage of shutting the world out as well as keeping your face from being stared at.

It's a sad truth that young black males face an uncomfortable level of scrutiny just for being black and in public.  They can have done nothing wrong; they don't even need to be walking with "swagger" - they can simply be going about their lives and still get suspicious looks based on nothing other than the colour of their skin.

Is there much difference between choosing to wear a hoodie to block out unwanted and undeserved stares and wearing a niqab for the same purpose? 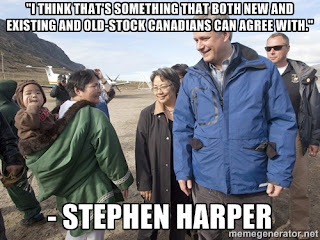 When you are constantly agitating on fears and threats and security of the state, it's easy to lose track of what safety and security means at the individual level.  In his personal and political narrative about troubles at shores, Harper is neglecting the personal freedoms and personal security of "those people" in Canadian society who are still marginalized by old stock Canadians for their ethnicity or gender.

Covering one's face isn't automatically a sign that someone has something to hide, any more than being a woman means you want to be cat-called or being a black man means you're about to steal something.

That's one side of the coin. 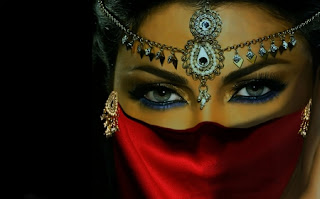 Whether a woman chooses to bare her breasts because she can or as an expression of personal power, or if a woman chooses to cover her face for the same reasons, is it not  masculine oppression to deny her the right to dress and express as she pleases?

Let's give Harper the benefit of the doubt and assume that the whole niqab-thing isn't just a distraction from Canada's faltering economy/dwindling reputation on the global stage/Duffy scandals/etc.  Let's assume this is something he actually feels strongly about.

If that's the case, it stands to reason that Harper has let his personal feelings, personal values and personal fears dictate what constitutes freedom for women.  It's a bit of government forcing its way into the garments of the individual.

Which is the kind of oppression our freedom and personal choice-loving PM should stand against.

The day may come where Harper's young daughter makes clothing choices that he does not approve of - to wear a veil, or to show a little bit of skin.

The real test of his values will be what he says in that moment.

Let's hope he remembers which Canada he lives in.