Brand Humanization: Whose Party is It, Anyway? 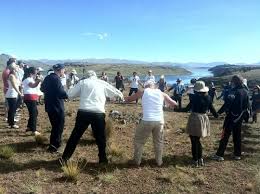 People join social communities because they have a purpose, an intent, and communities let them act on their intent. They are looking for a place to be (Facebook), a place to learn (Google+, Pinterest), a place to interact (Twitter).
In my Inbox rests a political donation solicitation letter titled "are you in?"  It is not designed to create a community.  It does not encourage participation, does not provide an opportunity for learning or growth and certainly isn't a place to interact.
Unless, of course, be participation and interaction you mean giving money.
The voter/donation solicitation process is supposed to work thusly:
-  you Big Data your way towards an understanding of what people are hungry for
-  you put your smart people in a room to come up with some ideas with an eye towards differentiation (not solution)
- you focus-group and hone your messaging
- you use it, your candidates and local issues as a way to ID potential voters
- you "touch" those potentials a minimum of three times to turn your leads into commitments (vote, volunteer, donor potential) and then hammer them until they do all three.
See what's missing in this picture?
There's no community. It's not social.
Back to the letter in my box.
And I'll, answer the question on everybody's mind: Will we have enough money to win?
- on whose mind?  It's definitely not on mine.  In fact, I was never asked what was on my mind.
Our victory will depend on raising the maximum amount of campaign funds.  It's really simple, your donation will help us reach more voters, by putting more organizers on the ground, more callers on the phone, inspire more volunteers and help us knock on more doors.
- who is referred to by "our" in this?  I don't feel it reflects me.  I don't feel like my contributions are desired.  There's no opportunity in here for me to learn, nor participate and really be part of something, like the our community.  They only want my money.  They are using ABC pressure tactics to get me to give it to them.  I feel kind of used.
During the final push, your donation will determine how many undecided voters we can identify.
Now I feel like I'm being squeezed out.  Without even lying that they'll call me later, they're rushing off to identity the next crop of people to be used.
This isn't community.  This is the opposite of community.
Now, for the opening sentence of the letter that I left out:
Later today, I'll head to a meeting with the senior campaign team.
By everyone, the writer meant the campaign team.  By our, the writer meant the campaign team.
Not the party, nor the member, not even the Member.  We aren't part of their "our" and we aren't wanted.  They matter; what they do, how they recruit, all of that is way more important than we are.  Our role is to give them money and get out of their way.
Politics is sales and the pie can only be cut so many ways.  Therefore, it's competition.  You're with us, you're against us or you don't matter.
Keeping that in mind, take a look at these MP exit interviews.  Consider the reality of civic disengagement and distrust of our politics.
Then, consider this:
What I'd like to do now is double down on Kent's claim that 2015 will be the year of the social contract (See: The Social Contract). To take a moment to remind you that you have an active role in shaping the continuing evolution of that social contract by cultivating relationships, engaging others and creating the narratives you want to work in, live in and play in.
I've shared that post a dozen times.  I've tweeted about it, promoted the event that's mentioned at the end of the post and shared variations on this theme from my own unique voice.
I haven't given Nick a red cent, but he's gotten a lot of free labour out of me, and intellectual property.  So have you, if you read anything I right.
It doesn't matter what colour their big tent is - they're not going to let you onto the stage to dance anyway.
If you want to join the real party, you don't need to pay to get into the tent.  It costs nothing to dance in the open.