The dramatic decline in oil prices will cost Ottawa about $5 billion in lost revenue and provincial economies a little more than that, one of Canada's biggest banks suggested today.
This is no biggie, Stephen Harper will tell us.  The information being provided misses the mark, or doesn't cover some aspect of his plan, or something.  At the end of the day, oil is too big to fail, right?
Harper has been involved with oil since his very first job.  He's a pretty obstinate (sorry, determined) fellow.  He's an economist, remember?  Plus he's the smartest guy in the room (that conveniently never includes Kathleen Wynne).  People just need to do what he tells them or go away.
He knows exactly what he's doing, confident fellow that he is.
If people can't accept that, it's because they're looking at the wrong facts, or cherry picking the right ones.  Reduce the flow of useless data and that problem starts to go away, right?  The only story left is the one you're selling.  The only facts left are the ones you're using.
It's easy, right?  Keep your eye on the oil, that's all that matters.  Don't commit sociology by looking laterally or thinking ahead.
You know, that thing that fuels the Knowledge Economy.  But then, this government has made it clear they don't believe in the value of knowledge - who needs to think when you have natural resources to exploit?
Harper has been politically successful, but he has bungled a whole host of files.  It's only by exploiting the fact that Canadians focus on the low-hanging fruit that he's kept from serious challenges to his competence.
He's probably assuming this is another one of those situations he's gotten so good at stick-handling; trot out a couple of Ministers for comments, or offer no comment at all.  Attack Trudeau, release some ads.  Move on.
Right? 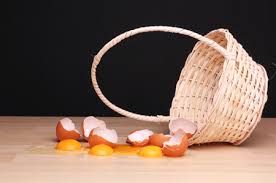 Except, when it comes to the economy he has no other eggs and no other baskets.  He also has been stifling social sustainability, so if things go really sour, the safety net will fill up fast, and then people will start spilling over.
And those people are going to be pretty pissed.
Harper's once again at bat, telling us not to worry, he's got this.
Now, more than ever, it's us who must be asking:
What if he's wrong?


Oh, somewhere in this favoured land the sun is shining bright,
The band is playing somewhere, and somewhere hearts are light;
And somewhere men are laughing, and somewhere children
shout,
But there is no joy in Mudville—mighty Casey has struck out.
Posted by Craig C-E at 21:21